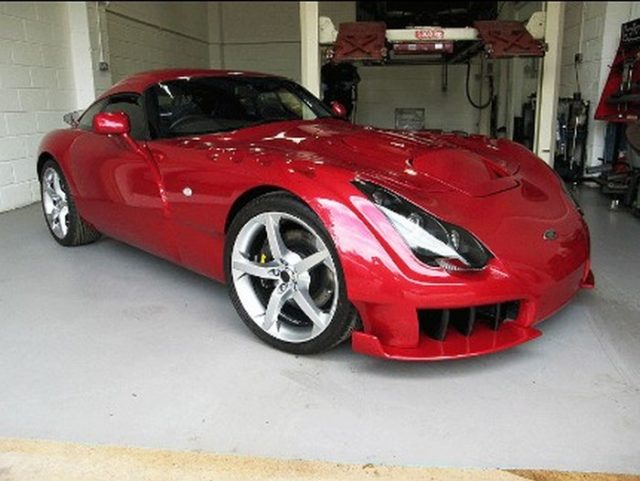 “When the company collapsed after being bought by Nikolay Smolensky, there was a lot of TVR stock left, so it was auctioned off,” said Neil. “The shell of my new Sagaris was made in 2006 and then sold at auction in 2007. The body went to Str8 Six in Oxfordshire to be built by Jason Clegg, who is a former TVR employee. He is world renowned for his work and, as he worked making engines for the company for five or six years, he really knows his stuff. When he got this body shell, he set about making the ultimate Sagaris.”

And that’s exactly what he did. This Sagaris features a 4.3-litre straight-six Speed-6 engine producing 450bhp and has a top speed of 195mph. Put all of those figures together and you get a 0-60mph time of 3.4 seconds. “The car was finished in December and put up for sale,” said Neil. There was a lot of interest in the car, and I saw it on a motoring website. The thing about the car is, for the money it was advertised for, people could have bought Porsches or Ferraris, or even a Lamborghini Gallardo. To spend that money on a TVR, you really have to appreciate the uniqueness of this model and understand the value of the car as one of the last Sagarises ever made. You could argue that the shell is four years old, but the car was registered as a 10-plate car so, technically, it’s a brand new car. It came with a Department of Transport certificate saying it was a TVR and that it’s a low-production model.”

“It’s not like jumping into a new car, it’s a hand-produced glass-fibre car, so you have to treat it differently. I’m still running it in and I can’t go above 3,500rpm, so I didn’t take it on the track, but it’s got a hell of a lot of torque and a lot more power than my previous car.”

His 19-year-old son, David, who has gradually gained an encyclopaedic knowledge of the marque, and his dad’s car. “He’s moved down to Glasgow now for university but, whenever he’s home, he’s the one that details the car and looks after it. He’s far more fanatical about cars than I am. I’d be happy to watch cars going past on the track, but he wants to know every detail about them. He drove the last car when we took it to Zolder, and he absolutely loved it.

Neil says he will never sell this rare Sagaris and will savour the time he spends with it when he’s at home. “Day to day, I drive a more sensible Mercedes ML 4×4. Mind you, it does have a Brabus chip.”