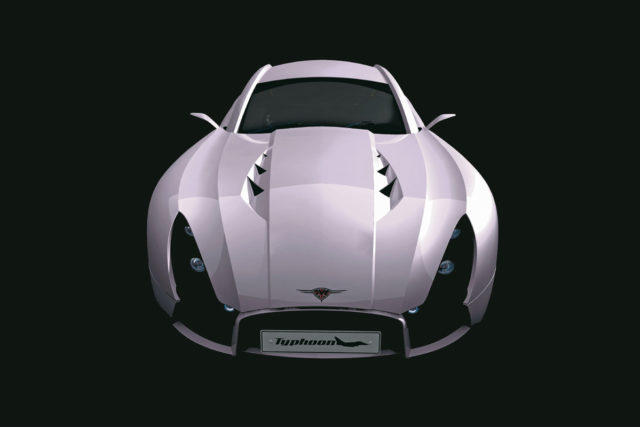 >One year ago, in this same period, we read on the main magazines that a new TVR was on the way: the TVR Typhoon. Powered by a supercharged version of TVR’s 4-litre straight-6 Speed sux, developed by Ricardo it was going to give 600 bhp and 500lb ft.

The Typhoon would have been the first TVR designed with the use of CAD to give the car the chance to exceed 200mph, and with a sub-4″sec 0-60 time; it was said it would have been eqipped with limited-slip diff and the T56 six-speed manual transmission from Corvette.

The Typhoon would have been the fastest production TVR ever, and at around £120,000 the most expensive too. Built to celebrate the firm’s 60th anniversary, the car would have been officially unveiled at the Geneva show and built in only 60 units all with RHD.

The chassis should have been a typical tubular steel backbone chassis with an integral rollcage (much longer than that of a Tuscan), but like the T400R/T440R and the later Typhon the body panels and floor are constructed from carbonfibre, helping keep weight down to 1100kg.

This car needed bo be successful, to convince the world and sports car buying public that TVR really was in safe hands. We’re still waiting for this.