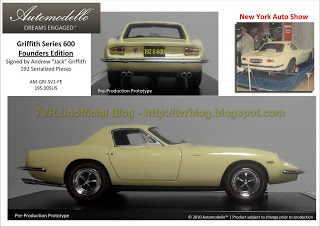 Automodello (www.automodello.com) already builds the superb Griffith Series 200 in 1/43 scale. The next model on the way of the American firm will be The Griffith Series 600, which is scheduled for release by mid-March in time for the Ultimate Griffith Reunion at the 2011 Amelia Island Concours d’ Elegance which will have 4 Griffiths in a non-judged tribute to Jack:

What is especially nice about the 600 is it was built by Intermeccanica, so it should play well on both sides of the Atlantic. When Griffith Motor Cars ceased, the 600 went to sleep instead and was subsequently resurrected as the Intermeccanica Omega. Automodello will be receiving an advance shipment of 24 units this month for distribution to the press. One 192 units of the 600 are being built.