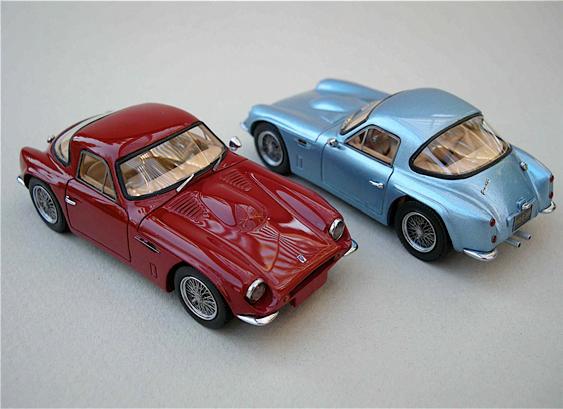 We already talked about a new project from Automodello: the Griffith Series 200 in 1/43 scale. Now, finally, this project has come to reality.

Automodello is proud to announce the very first release in its new line of premium 1/43 scale replicas: the Series 200 from Griffith Motorcars—a classic 60’s blend of British finesse and American V-8 muscle.
Automodello enlisted Raffi Minasian—one of the best known and most respected designers in the diecast industry—to craft, with technical design assistance from Christopher Keller.

The Automodello™ Griffith 200 is the first and only replica officially endorsed by Jack Griffith himself, and every Founder’s Edition will carry his signature.
Technical assistance on the model design was provided by Mike Mooney, president of the Griffith Motorcar Club and the Griffith Car Registry.

Automodello™ will be releasing two versions of the Griffith 200—a standard edition of 262 pieces matching the total number of all Griffiths produced and an ultra-collectible “Founders Edition” of just 192 pieces—matching the exact number of original Griffith 200s produced. Each Founders Edition model is individually serial-numbered and includes a certificate of authenticity signed by Jack Griffith. As a special service to Founder’s Edition buyers, Automodello will even honor requests for specific serial numbers on a first-come first-serve basis!

Both versions are available for pre-order right now through Diecasm LLC (www.Diecasm.com) and from other fine diecast dealers. Go to www.automodello.com for a full list of authorized dealers. Expected delivery is spring 2010 for both versions. MSRP is $95 for the standard edition, $195 for the Founders Edition.

Automodello and the 1/43 Griffith Series 200 will be at International Toy Fair in Nurnberg (04 – 09 of February 2010 in Hall 7, Stand C-49 in the M&D International, the international export agent for Automodello).