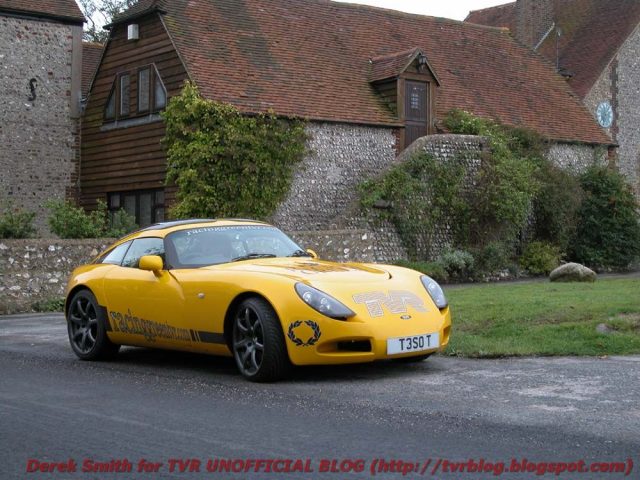 Together with a friend I took Racing Green Cars’ T350T demonstrator, complete with the gloriously apt index number of T350T, to the Spa round of the Le Mans Endurance Series race in September 2004. The car was stunning and I have to say that I have rarely enjoyed a journey so much.

Despite the weekend being full of incident the thing which stuck in my mind was an outrageous coincidence that was the stuff of legend. But before we get to that, the car.

I had gone to Le Mans in a Tuscan Mk1 so the joy of the engine on full song was not new to me, but the T350 seemed a better package. It lacked the glorious interior and the dramatic exterior but out of the two I preferred it. But it wasn’t without fault.

The chrome surround to the petrol filler fell off somewhere in Belgium. Talking to a worker at the factory I was told that the most likely cause of this was the petrol soluble adhesive they used. I was used to TVR by then and asked no further questions. Further, the tank would not take a full flow of petrol and one garage we stopped at the pump was either off or fully on.

The second problem, and for me the much bigger one, was that on any fast right-hander the air conditioning unit dumped all but freezing cold water in my lap. The shock element, and I can tell you that it was considerable, was nothing compared to the embarrassment experienced when trying to book into a German hotel with stains around the fly area.

And the seat fouled the roll cage when pushed back far enough to accommodate a six foot+ occupant. And that included both of us.

Stowage caused a few difficulties. The boot was shallow and whilst it was ample for two blokes for a weekend, my wife was aghast at its size. As only a woman can be when confronted by something shockingly small. Or so I’m told.

The glove locker was suitable for just that: one glove. I put my passport in it and that meant both gloves had to be put elsewhere.

The two removable hatches were noisy at speed. And we went at speed. 130+ for mile after mile and in extreme, but noisy, comfort.

The roadholding was something else. My driver missed the sharpness of a right-hander. It went on and on and on. At the speed we came into it lifting off was not an option but the car went round it without any fuss. It was tremendous. I’ve been in a few sports cars in my time but the ultimate grip of the T350 was a class apart.

The ride on good and medium quality surfaces was superb. After driving in one day from Racing Green in Hampshire to Germany with just the tunnel as a break we both felt no discomfort or any of those little aches or pains. The seats were very confortable. With a little development the car could have been a world beater.

The race was a disappointment for TVR fans as one of the LNT T400Rs, the best placed one, was taken out at the Bus Stop by an errant Audi that opted for grass rather than tarmac to brake on. The damage looked catastrophic but the cockpit remained intact and the driver was merely ‘shaken’. The third TVR, the De Walt Peninsular one, ran out of fuel two laps from the end. So not a great day for us.

We were told when we picked up the T350T that there was only one other out on the road so we would be the only one on the continent. So imagine our surprise when, just approaching a parking space at Spa, what should pull in before us but another T350T. This was driven by a very pleasant father with son as passenger, both of whom were equally as shocked to find the only other . . . etc.

The odds against both cars arriving at the same time, within five seconds, and heading for the same parking space are long. I know someone eventually wins the Euro lottery but the odds were longer than that.

In talking to the driver he told me that he thought the car was wonderful, the best sports car – not only TVR – he’d ever driven. I asked him if he had any criticisms and he said just the narrow filler, the chrome surround, the lack of stowage space, the seats fouling the rollcage – which he had temporarily fixed by gluing t a bit of carpet to the seat – and, most irritating for his son, was the freezing water. The interior was rather special with some exquitie detailing.

The T350 is a magic car. The 3.6 Speed 6 was much more reliable than the 4.0, at least according to John Ravenscroft and he should know. Everywhere we went it attracted attention.