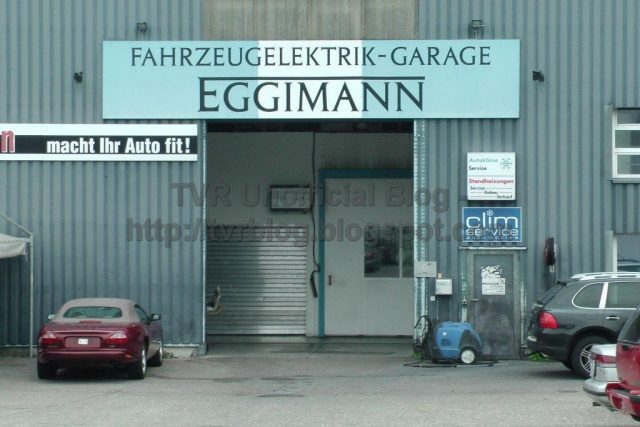 At 15.10.2010 I had an interview with Beat Eggimann, owner of this garage and owner of EGGIMANN RACING, in Sissach, to talk with him about his TVR Sagaris prototype Nr. 2, which was published on TVR Unofficial Blog. I wanted only to take some photos of his car, but what I have seen on this day is worth to be shown in a separate article.

The story of this garage begins in 1986 with supporting DeTomaso, some MG’s and some classics. The MG’s were modified with V8 engines, developped to race cars. They were driven in Swiss-Races, Slaloms and hill climbing races. Later Beat Eggimann supported Jaguars from the 70s.
One day in 1998 he bought a TVR S3 and so was infected by the TVR-virus. The TVR S3 was converted to a race car too. Later he owned a Griffith. Then a LHD TVR Sagaris with Euro 4 rules was ordered, but unfortunately TVR went bankrupt and the car was never delivered. He tried also to get the swiss representation of the marque, but it was too late. Today Beat Eggimann supports about 40 TVR cars in Switzerland, so 4 Sagaris, 2 Tamoras, ca 8 Tuscans, some Cerberas and a lot of Griffiths and Chimaeras. He has 5 mechanics, who are helping him supporting the cars.
There are also done some restaurations of classic cars and „normal“ work on newer cars. His second firm EGGIMANN RACING is doing race-servicing and organising motoring sports events. Today EGGIMANN AUTOTECHNIK, Sissach is in Switzerland this, what Racing Green is in England or UK GARAGE is in Italy. Let’s see some pictures. Very impressive for me was the mixture of TVR’s (here Sagaris and Tuscan), Race cars, some normal cars, and some classics (here a Sunbeam Tiger).

Here Beat Eggimann at the phone organizing parts. I hope that I can have a next visit to this extraordinary place, where the tradition of TVR lives on, in winter.
I will be there to take some pictures and I hope you will enjoy it as I did.