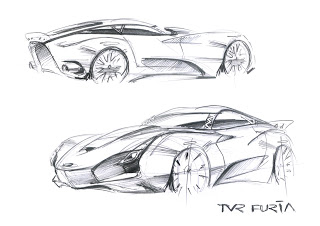 Today is the day of 2011 Geneva Autoshow. There are many proposals from all supercars builders but, in my opinion, only few can say something new. Maybe only one: the Ferrari FF. Not because I’m a Ferrari fan (I’m a TVR fan, and a Ferrari fan but until the F40) but becasue it’s a very brave car and I think she will be followed by many competitors. At the “second place” I’d like to mention the Lamborghini Aventador, which is going to take to the road legal universe very interesting solutions like push rod suspensions and a carbon fiber monocoque chassis. Else where I see only the need to propose to customers “old cars” which have been embellished with colours, accessories and low production figures. But in my opinion it’s only an illusion: I think they’re only trying to get rid of their chassis

But of course, I’m always waiting for the day I’ll be in Geneva to attend the official unveiling of a new TVR. Like the TVR Furia that it’s pictured above. Like many other sketches the designer started his creation process fomr the TVR Sagaris.

In the rear part It seems to me he took some inspiration from the Cobra Daytona (anyway it’s beautiful). In the front part maybe I see a Lamborghini Reventon. And maybe I’m wrong but on the roof I see a double bubble and as a Zagato worker I really think my company could give the new TVR a great style.

[Thanks to Chris for the tip]