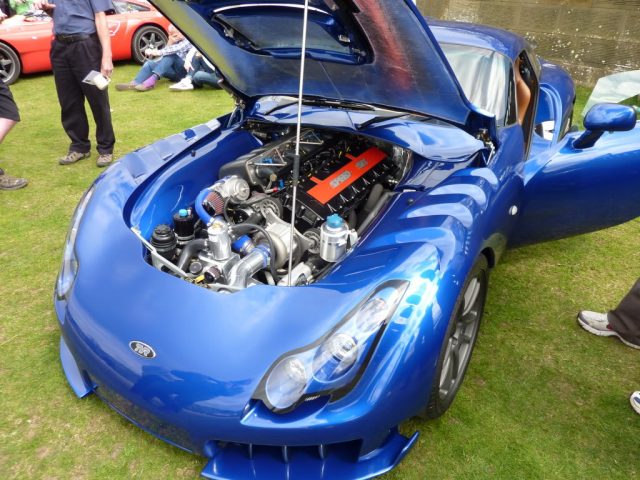 TVR production goes on… elsewhere! Str8six garage of Oxfordshire released two RHD TVR Sagaris for two TVR enthusiasts who can tell the world they purchased a TVR Sagaris from new in 2010! We’re in front of exceptional units. These cars were “saved” from TVR Bankrupcy because Str8six acquired many spare parts and some completed frames. Then the official TVR garage went on completing them with new updates. The result is here: people at the garage have completed these two TVR Sagaris with all their original parts. They could be dubbed as a continuation model.

The first one is painted blue with brown leather interior (image credits: Barry Ashcroft). Looking at images there’s a particoular aspect: the engine.
This TVR Sagaris is equipped with the mighty classic Line-6 Speed-Six engine but a Rotrex supercharger running 1 bar pressure was added. The result is circa 500bhp with more to come later. In the rear sight the owner choosed for a double exhaust pipe, something very common today (Porsche Carrera S, Ferrari, BMW M3, Lambo Gallardo…). The interior received a whole leather covering but, maybe the color (a personal taste, of course) could have been totally black.

A question emerges, after all. Are these car worth being included in the TVR Sagaris Register of Pistonheads’ Forum? In other words: can we consider them totally original? May they hold the TVR emblem? It’s a very interesting question. If you have any opinion, share it with Tvr Unofficial Blog.