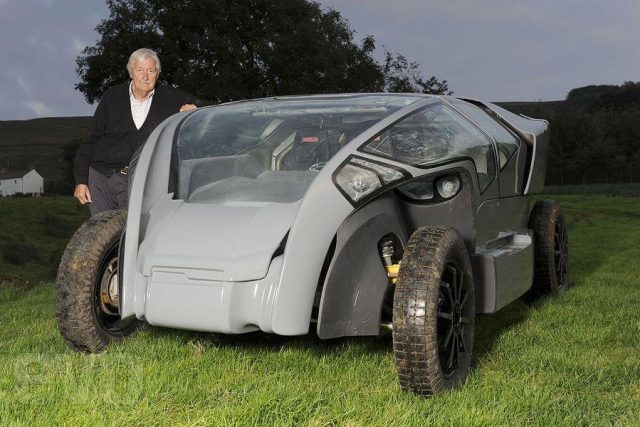 This one of a kind vehicle was built from Peter Wheeler as a prototype for a future line of amphibious vehicles. “Lots of people are fed up with their traditional sports cars, like Ferrari and Lamborghini produce, so I wanted to create an alternative,” Wheeler told EVO Magazine. “I created it for me, to be honest. I enjoy shooting, sailing and driving on track, so I wanted something that could cover all these elements. I call it an RRV, for rapid response vehicle.”
Wheeler’s solution for the ultimate vehicular paradox was similar to the formula he used to make TVR super cars so incredible – build it as light and as simple as possible. Instead of using four- or all-wheel drive combined with a separate water propulsion system, he instead spec’d 35-inch diameter tires designed to function like those on a tractor and removable paddles for the only driven wheels, the rear ones. The body consists of foam-filled plastic pods fixed to a central aluminum tub. All together this keeps weight down to just 2,425 Lbs.

The Scamander was powered by a 2.0-liter Ford Zetec engine, but Wheeler intended that the finished product would have used the light, simple 4.6-liter Rover V8 that he had so much luck with at TVR. He also envisioned a system called “fiddle brakes” capable of individually braking the wheels to act as a sort of super limited-slip differential.
For optimum control, the driver sits centrally, with room for passenger race buckets under the awkwardly shaped cabin behind them. Vision is enhanced by the massive canopy in addition to the portals in the front wheel wells, those enable accurate placement of the front wheels for tricky off-road maneuvering.
Behind the passengers, under a large plastic hatch is a pickup-style bed. This hints at the vehicle’s intended purpose. To get around the “stupidity of all this CO2 nonsense,”Wheeler said he intended to classify the Scamander as a commercial vehicle.
We don’t currently know what will come of the Scamander RRV following Wheeler’s death. It appears that he was privately financing the unfinished project, meaning it’s unlikely we’ll ever see it reach production. That’s a shame, because he had big plans for it.

thanks to: Christophe from Bordeaux (F)