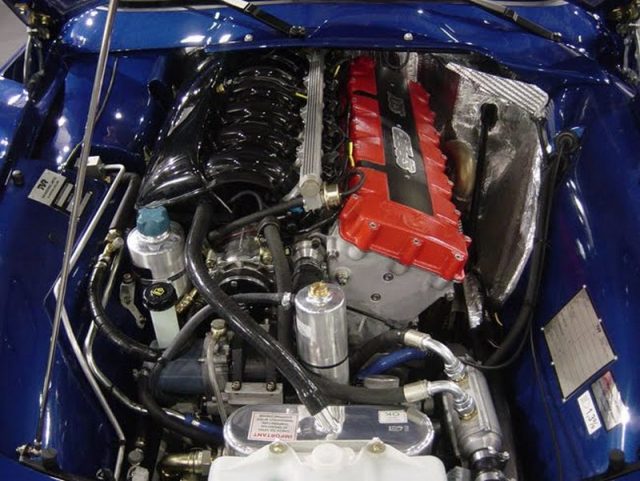 Anyone who is seriously thinking about a TVR with the Speed-6 engine (a TVR Cerbera, a TVR Tuscan, a TVR Tamora, a TVR T350 or a TVR Sagaris) would like to suffer as few problems as he could (I already spoke about a blown head gasket with a lot of images). The great straight-6 of these cars give great emotions at the wheel but even many problems if it didn’t received all necessary cares (here are some advices even if they regards the T350).

That’s why every new owner is even more in heaven if the car received one of the well known engine rebuilds. But is it enough? Here’s an interesting question: “how many have required another re-build? they had a lot of issues when they first come out of the factory but most of these would have been addressed when they needed re-building. Is it safe to say if one has had a good re-build that they should then last a few miles (50k or more?).”

Anyway there’s surely an evidence: the younger the car is, the stronger she is.

Here are some opinions and personal experiences:

1) I have heard of some of the very early Speed Six engines needing more than one rebuild. Remember though that rebuilds can be for several reasons so a second rebuild may be a different problem (the factory rarely told people what was changed/fixed, the engine just came back to the dealer on a pallet). The later cars seem pretty solid so I wouldn’t worry about it too much. Get the car checked by a knowledgeable garage, get a fresh MOT (emmissons is one thing that can give a bad engine away), and go for it! Cars with 40-50k miles on them will already be price-adjusted for the paranoid so you’ve got some spare pennies for a repair if needed. BTW, with an engine like this, assuming it is used as god intended (and treated properly!!), I would expect to have it stripped and rebuilt every 50-60k anyway

2) My engine had a rebuild in December 2004 at TVR, however the bill dosnt say what they did, just full engine rebuild. Its now going in this winter for a new head with up dated bits as the stem seals are leaking. So not sure if that counts as 2 or just 1 1/2.

3) I have a 2002 Tamora and chose to have the engine completely stripped and rebuilt/upgraded from 3.6L to 4.0L with new parts and crankshaft etc, in 2007 by Richard at Dulfords. In that time I have done 19000 miles since, and the engine is running like a dream. I am confident that the rebuild will last for many thousands of miles to come and don’t anticipate any re-rebuild in the foreseeable future.

4) I think you cant really EXPECT a rebuilt engine to do 50K but it is certainly improving the odds. Part of the problem is that not many TVRs get a lot of miles put on them and not many are every day cars (unlike when the cars were newer) so there are less rebuilds needed now and so it is not so easy to judge the success of the solutions provided?

5) My July ’00 car had 2 in it’s first 2.5 years and 14k miles. The first was at about 8k for worn finger followers and then a second at the end of 2002 at 14k miles with a new updated head fitted due to a burnt valve seat. It’s now done about 42k since the head replacement with no major problems (yet!)

6) As already mentioned these engines are in virtual race tune and if treated correctly a rebuild at 50k is not bad going. Some go substancially longer. There’s a T350 on here at 135k with only 1 rebuild. The key factor with ANY engine is mechanical sympathy….keep it maintained and warm it before extending it and all should be well. Many cossies and evos have had far more rebuilds at far lower mileages with a far bigger bill!

7) I’ve got a 1999 Speed Six in a Cerbera. It was rebuilt at 34,000 and began to show cam wear problems within 3.5K. These were replaced but a service at another indy lead to the failure of the half time bearing (poor workmanship by the servicing Indy). The head suffered warping and a oil leak which lead to a rebuild at 7,000 after the orginal rebuild. I must say that despite being out of warranty the rebuilder completely rebuilt the engine free of charge.

8) I had a year 2000 Tuscan that had a TVR rebuild at 35k back in 2003. I bought late 2006 and she went staright for a rebuild at 70k. This time at Str8Six so with new oil way mods and better materials etc. I unfortunately broke her at 90k + but the engine seemed in very good shape and I was hoping that she would have lasted much more than the previous 2 x 35k.