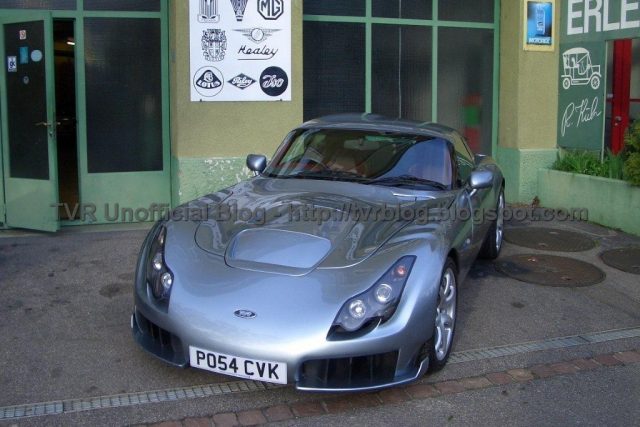 (Listed in the TVR Sagaris Register of Pistonheads.com as car n.77)

Informations:
This is a really special car, it’s a part of the TVR history. The car, known as TRV Sagaris Prototype Nr. 2, was a pre-production car, which was used to test different solutions of problems. You can see on the car different development stages. Looking at the engine number, it seems that there is a 3.6 l engine.

The car was used by TVR until december 2005, then it was sold to the Millenium Racing Team and used for racing. In september 2006 the car was sold to Beat Eggimann, owner of Eggimann Cars, Sissach, Switzerland.
In the images below. the Sagaris Nr. 2 was photographed in April 2008 at the Erlengarage, Rolf Kühn, Basel. The car went to Fribourg in a TVR exposition, organised by Rolf Kühn.

Beat Eggimann has the intention to make a conversion from RHD to LHD. It is a private project, which he is doing with some friends. The project started in november 2009. The work will be done essentially during free time. In 2007 he could buy a complete steering unit. An important job was to make a “negative” of the roof, an exact copy of the original RHD roof, converted to LHD. The complete interior must be done new, also the dash and all other parts of the middle console. The colour oft the interior will be dark, grey or black. Now it has a Speed-6 3.6 litres engine, which will be converted to a 4.0 litres unit. The car will hit the streets again in Summer 2011.

Here some pictures of Prototype 2 in october 2010 in the Garage of Beat Eggimann (in the image below Beat Eggimann with his car) in Sissach, Switzerland.

In the following images, the Sagaris Prototype n.2 during the working process which will transform it into a TVR Sagaris Left Hand Drive.

Later in the building process we will have some further pictures.

Thanks to Beat Eggimann for the informations about his car.