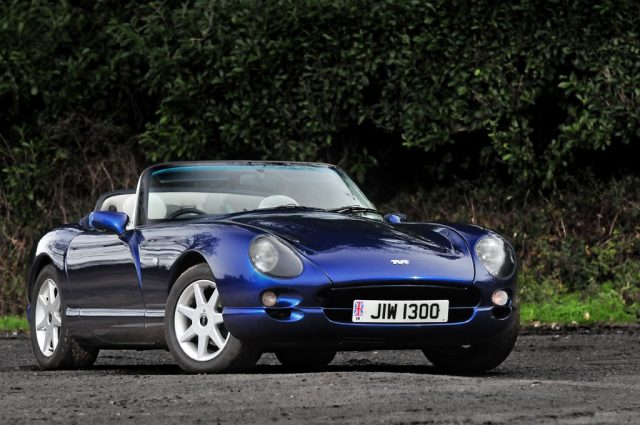 My Chimaera failed its MoT on the handbrake. As any TVR owner will tell you, this is not an unusual occurrence. In fact if you get a weedy looking tester you know full well it is going to be a long day.

I was chatting to the tester as he filled in the electronic failure form and noticed that the kerbside weight of the car, on which the handbrake requirement is set, was given as 1280kgs whereas the handbook gave it as 1080. I pointed this out and said that I thought that weight referred to the Cerbera in V8 guise.

The chap ran through the database and discovered that the Cerb was indeed 1280kgs. When I told him that it was a four-seater (a slight exaggeration) hardtop with air-con and other heavy stuff he accepted that the 1280 might be wrong for the Cim and put in 1080. Further investigation showed that all TVRS had 1280 as the kerbside weight: Ms as well as Cerbs.

He said that when the weight was changed they often got a pull from VOSA, which controls MoTs, and he would pass that on to me. To head VOSA off at the pass I contacted them first.

The chap was quite helpful and, surprisingly, listened. He asked a few questions and then said he would get the chap who had originated the 1280kgs to give me a call. Equally surprisingly to anyone who has had dealings with officialdom, he did indeed phone me, and within a couple of days.

The first thing he did was to thank me for my help. More surprises. I then asked him where he had got the 1280kgs for all TVRs from. He said:

“I knew it was wrong but I was stuck. I phoned TVR and spoke to a woman who seemed very helpful. I asked to be put through to their technical department and she told me they didn’t have one and could she help. I told her I wanted the kerbside weights of all TVRs and she said she knew who to ask.

“I didn’t expect a reply there and then: I assumed I would get an email with the various models with weights according to equipment fitted. However she asked me to wait. The phone became a bit muffled, I thought she put her hand over the mouthpiece, but I could hear her call out to someone.

“There was a short delay, a minute or so, then someone called back. She came on the phone again and said: “1280 kilograms.” I asked her which car and she said all of them. I said I thought that extremely unlikely given the range of models and I could almost hear her shrug in disinterest.

“It was unique for the person on the switchboard to give me the details of kerbside weights. As I say, I knew it was wrong but what could I do?”

The idea that anyone should think TVR had switchboard staff was quite endearing.

So if you think your TVR is likely to fail the MoT on its handbrake (if?) ensure that the correct kerbside weight is shown.