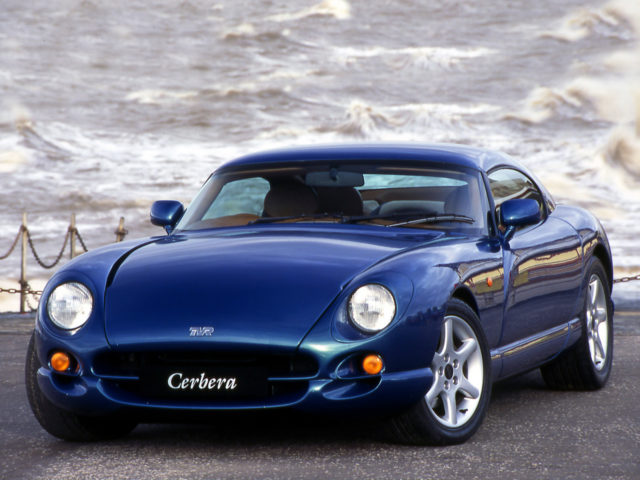 Cerbera is pronounced Sir – burr – uh and is derived from the mythological beast, Cerberus, who was the brother of the Chimaera. In addition, in Italian, una cerbera is a frightening, fierce woman.
The TVR Cerbera began its life in the early summer of 1993 as a styling exercise by TVR’s team of designers, who quickly gave the go-ahead to start building full-scale models. They sculpted the car out of full-size blocks of foam rather than being constrained by the two dimensions of a paper sketch or the dehumanising aspects of design by computer. A handsome Gran Turismo car began to take shape and it was easy to see that the car would be a winner so a running prototype was prepared for the 1993 London Motor Show.

Unencumbered by endless committees, TVR was able to complete the prototype in record time and the Cerbera was unveiled at the show. It was greeted with tremendous acclaim. Orders flooded in, further 276 of them at the 1994 Birmingham Motor Show alone. Since then, almost every aspect of the car has been improved. Originally, the Cerbera was designed to be powered by the TVR Power Rover based engines but it was decided that TVR’s own engine, the Speed Eight, would be a more suitable power plant.

Although sharing styling cues with the Chimaera, the Cerbera is a completely new car with new brakes, chassis, suspension and a different construction method. Introduced in response to overwhelming customer demand for a 2+2, the Cerbera has seen TVR return to a market sector that it has not inhabited since 1985. With the Cerbera’s interior, TVR have discarded conventional thinking and have created a dashboard binnacle in which all the instruments are right in front of the driver. The clock and the fuel gauge, visible through the steering wheel, and a fresh air vent are situated under the steering column and are adjustable for reach and rake with it. Mounted on the steering wheel are controls for the main beam, windscreen washers and wipers as well as the horn.

The Cerbera is more than a normal 2+2 in that, in terms of the configuration of its seating arrangement, it would be better described as a 3+1. The front passenger seat is able to slide forward further than normal, thereby freeing a substantial amount of extra legroom for the passenger sitting directly behind. Attention has been paid to the ease of access to the rear seats which in too many 2+2s is unnecessarily difficult. Therefore, the Cerbera’s doors are long enough to make getting into the back seats much easier.

The TVR Cerbera comes with three different engines:
1) The TVR Cerbera Speed Six was the first car to be fitted with TVR’s own straight six and has softer suspension and higher profile tyres to give a more comfortable ride and less road noise in line with its grand touring design. Very much in the tradition of British sports cars of the sixties but with modern abilities, the Cerbera Speed Six is a coupe with a very British, very sporting nature.

2) The TVR Cerbera 4.2 remains in production for those customers who prefer a V8

3) The TVR Cerbera 4.5 gives a range topping 420 bhp and 380 ft.lbs. of torque. Getting to 60 mph in 3.9 seconds, 100 in 8.1 and 150 in 17.9, the Cerbera 4.5 is one of the fastest road cars in existence. With larger brakes, modified suspension and larger wheels and tyres, the Cerbera 4.5 offers the handling and braking to match its performance, stopping from 100 mph in only 3.8 seconds. The 4.5 Cerbera also includes a Hydratrak speed sensitive differential as standard. For the 2000 model year, lights, A pillars, roofline and seats were changed and lightweight bonnet, doors and bootlid were introduced on the Cerbera 4.5.