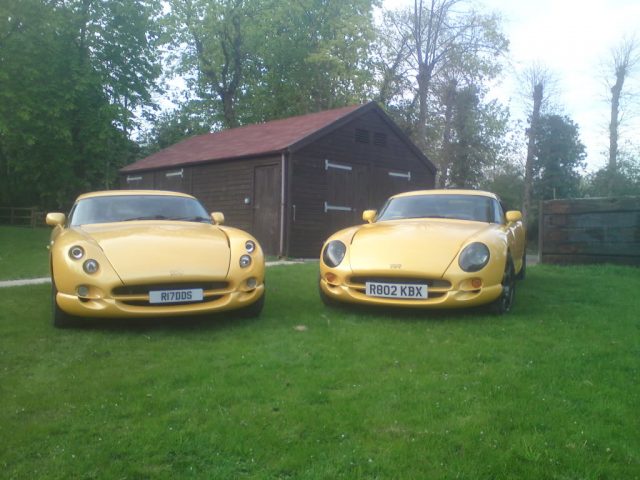 Here is a useful vademecum to recognize a TVR Cerbera MK1 and an MK2: the front and rear lights changed on chassis number 2017 on 25/9/99 for the show car, screens never changed in size; the only difference was the obscuration band and header panel on the screen.

1) There is a mk 1 and mk 2 windscreen with a 20mm banding difference which makes the windsceen area larger.
2) 4.2/SS Kept standard front lights,4.5 had the stuck inpod with twinlights, this then changed again so the front lights were all the twin lights but not in a pod they were frenched into the body.
3) The roof line was changed to run from the rear shoulder to the front screen so that bigger A post panels (colour coded not carbon fibre) could be fitted this gave a cleaner full line (idea taken from the audi TT).
4) The rear lights changed to the round land rover round ones away from the ford fiesta ones, these were first on a pod to be stuck in and then changed to being moulded into the body.
5) Windscreen obscuration band changed in size fron 50mm to 30mm and a sun shading
band in the top of the screen and heated front became an option.
6) The front cante rail changed so no sun visors on the inside of the car.
7) The seat changed to Tuscan style and the rears were redesigned to remove the headrest and to try and match the fronts,also limited movement on the passenger seat for rear legroom.
8) Rear window changed position of contacts for the heater element.
9) Wheels changed 4.2 kept the originals,16inch, so did the speed six,spiders were an option,4.5
had front spiders all round and then this was changed to 18inch spiders on all.
10) The lower panel of the rear screen was painted into body colour and not carbon fibre.
11) The dash air vents changed from small round at the bottom of the screen to large round ones in the dash board itself.
12) Rear number plate was slanted and no longer back lit