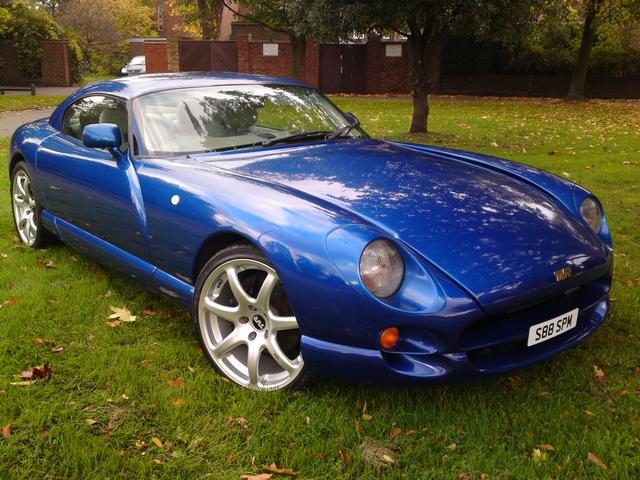 There are mainly three kinds of engine in the modern TVRs: the Rv8 unit (TVR Chimaera, TVR Griffith), the Speed-6 (TVR Tuscan, TVR T350, TVR Tamora, TVR Sagaris) and the AJP V8, the first engine exclusively engineered and built for TVR purposes. It was used only on the Cerbera, with several layouts: 4.2, 4.5, Red Rose.

Starting from the engine of a TVR is crucial. Because every TVR is a very simple car, parts like gearbox, chassis, suspensions, differential, electrical system don’t need particoular cares. On the contrary, the engine is the most important part, that one which can influence in a decisive way your budget.

I WANT the Cerbera

If your aim is a TVR Cerbera, a very sporty car with 4 seats, the question is always the same: what to look out for when buying a Cerb? The first important suggestion is the usage. If you’re looking for a TVR Cerbera as a daily driver, many people say you should be prepared for such a car so sporty and fast. They suggest, otherwise, to look for a good TVR Chimaera, more confortable.

Do you know what’s a Cerbera?

A friend of mine, a very passionate Italian (how strange!) guy, who already owns a Porsche 993 Turbo, went to UK and came back home with a stunning Cerbera 4.5 MK2. He wasn’t so aware of what he was going to purchase but his passion deserved a TVR. Well, he currently said he won’t ever sell it!

Despite this, a TVR is an amazing car for who can “understand” her. Anyone who you’ll ask for an advice will tell you: “buy a TVR with your heart, not with the head”! Here’s a “voice”: “It’s a car that you will always be looking at the Temp and Oil pressure gauges when you are stuck in a traffic jam, it’s a car for an enthusiast, and there will always be something that needs doing to it – nothing major, just fixing little niggles, and you’ll always be striving to get it ‘just right'”.

Almost all who know the TVR world and owned a TVR think the same thing: the AJP V8 engine is one of the best engines in TVR history.On the contrary, you’ll be always discouraged from considering a TVR Cerbera Speed-6 for its known problems in realibility. The AJP V8 is not too complex for a good mechanic and parts are easily available. In a general view, it would be better to avoid an old TVR Cerbera 4.2 as there’s a certain statistic of some problems with early cranks.

The gearbox is a standard Borg Warner T5 so easy to replace for not too much money. Diff is also a standard unit and not too expensive. Cerberas are quite cheap to run and maintain for a super car really.Many of the parts are no more than equivalents for a family car from the upper end of the market, BMW, Audi etc.

TVR Cerbera is a good choice as the poor man’s supercar but they do need looking after. 3k is the generally accepted annual average, the first year could cost you just a service cost or 4-8 thousand. The cheaper end would probably mean they need money spent on them and even a car with a good history does not mean there is a big bill around the corner.
(Chassis) Condition, (Service) History and driveability are most important things to examine when considering a TVR Cerbera. Under the bonnet is usually requested only to keep a check on levels, and leave the rest to the experts, of course a TVR specialist which obviously terns out a bit cheaper. They recommend every 6k, for a service (12k for a big one), around sort of £300-£400 for a half service, and £700-£800 for a full. Alternate.
Basically, a TVR Cerbera needs £2000 each year but you must be extremely awared of the car’s conditions and what was its maintenance story.

Pay attention on what you buy!

I write as last of the most important advice. Here is an experience from a TVR Cerbera owner:
“I bought a car that had an incredible service history by a well known TVR specialist which I thought would be some assurance of the cars condition. I have already replaced, after 1 month, the shocks and overhauled the suspension, several boots, gaiters and bushes. As a matter of urgency I need to replace the metal & rubber coolant hoses, I have the wrong Tuscan Spiders on the front which foul the wishbones, some issues with the clutch and the list goes on. Now I run a small car repair business and am slightly embarrassed at having missed all these items when I looked at the car, but I have to say the previous owner took me out for a long run in the car and gave me all the time I needed to make my decision, I just got overwhelmed with the whole Cerbera experience and bought with my heart instead of my head. All of these issues will be sorted and I will have an incredible car to enjoy, if you just take your time look at several cars and when you have chosen one get it checked out before you commit to buy hopefully your TVR Cerbera experience will start in the best way”.