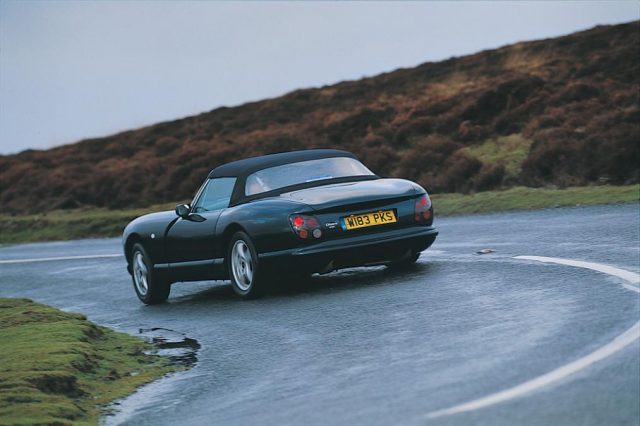 Any TVR sends a sharp shiver of apprehension through your system before you slip down into the driving seat, and despite its reputation as the teddy bear of the range the Chimaera 450 still demands a healthy dose of respect. No traction control, no ABS, an engine bursting with torque, no prisoners. The woofly V8 sounds friendly enough, but then a grizzly bear can look pretty cuddly…

Its owner did his research before getting this Starmist Blue 450. The 240bhp Chimaera 400 is plentiful but not quite fast enough; the 340bhp 500 appealed, but he heard too many tales of mechanical gremlins. The 285bhp 450 offered the perfect compromise: fast enough to scare, reliable enough not to terrify.

It’s a glorious looking thing and when you press the little rubber button under the wing mirror to pop open the door and reveal the leather-lined, cocooning interior, you’re already hooked. Slide down behind the lovely three-spoke wheel, twist the key and hear that barrel-chested V8 catch with a boom! Feel the Chimaera rock gently on its springs under the torque load.

Punch the stubby gearlever into first, feed in the clutch and immediately this 450 feels tight and controlled, like new. The damping is wonderfully taut and accurate, and it feels as well built as any TVR I’ve driven. The steering is slow by TVR standards and quite weighty, so you’re not on edge or trying to smooth your inputs to make sense of the dynamics. Instead it feels natural and you can quickly start to feel your way into the chassis’ dynamics, using the torque to make good progress and start testing the 225/50 ZR16 rear Toyos.

They stand up well to the engine’s thumping mid-range. Traction is strong and the Chimaera feels compact, usable. Friendly, too – there’s none of the hair-trigger oversteer you might expect. In fact due to quite a soft set-up it tends to push at the front before the rears are overwhelmed. Once you’ve felt that it’s a pretty viceless chassis and you start to push at its limits, you’re actually combating understeer rather than trying to tame the rear. It turns in sharply enough, but as you open the floodgates (which seem to release the same torrent at 2000rpm as they do at 5000rpm) the nose washes wide, which is a bit frustrating.

Unlike the more aggressive Griff, the Chimaera is a car that’s happiest at seven- or eight-tenths. Even so, it’s dealt with the most severe stretch of our test route with disdain. Very impressive.

There’s an honesty to the TVR; the physical effort required to change gears, the accuracy with which you must match revs and wheel speed in downshifts to avoid locked rear wheels, the meaty feedback from the steering – it’s a car you’ve really got to drive. You’re mindful of the lack of ABS, but the stopping power and pedal feel are amongst the best here, so it’s just one example of how the TVR really challenges the driver to take control of everything. The Chimaera is a car full of potential, but it’s nothing if the driver isn’t up to the job.