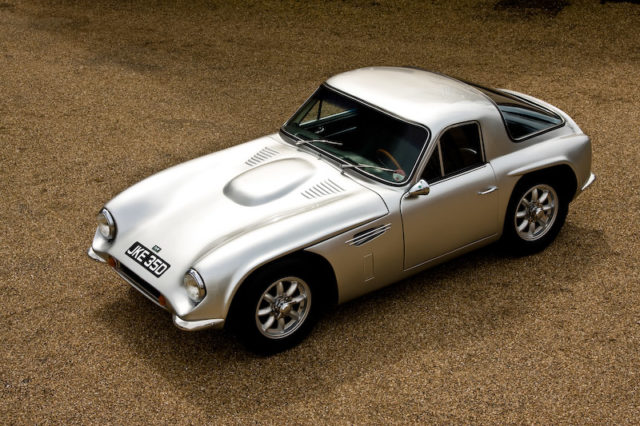 TVR Grantura 400. In 1964, the Griffith 200 was replaced by the 400. The original 200 model also tended to overheat, but the better-engineered 400 replaced it in spring 1964, bringing twin thermostatic cooling fans that addressed the problem but didn’t entirely cure it. The 400 also introduced the sharply cropped tail and big rear window that would persist at TVR through the end of the ’70s. The 400 was a much better all around car that received the new-style Manx tail and vastly improved cooling for the big V8. This improved car could not erase the negative press that the 200 had received though. Sales, while good, were not enough to keep the Griffith, and Grantura Engineering as a whole, afloat in the US. In 1965, production of the Griffith ended with around 200 produced. The Griffith was not entirely dead though, Martin Lilley resurrected the nameplate for a run of 10 cars under his new ownership from April 1966 through January of ’67. Despite the end of this final run of Griffiths, TVR’s link with American V8s was not over, it was to be continued with the soon to debut Tuscan.

The 400 was well received, and TVR was soon shipping five engine-less cars per week. High power and low weight meant vivid performance, but nose-heavy balance could make it a handling nightmare. The Griffith, said British auto writer Roger Bell, “has too much power for its own good in less than perfect conditions. That’s what makes it so exciting. . . .”

The car was soon done in by its own quality problems and, more seriously, a prolonged U.S. dockworkers strike. Jack Griffith gave up after 1965, thus shattering TVR’s fragile finances and forcing the Blackpool concern into liquidation. While there’d be many more TVRs to come, none were quite as hairy as the original TVR Griffith.

How many. Griffith Motors produced 203 of the Model 200s and then started building the Model 400, of which only 58 were made. Production was canceled due to a dock strike in late 1965, which devastated Griffith’s cash flow.

Some Griffs again. The Griffith was not entirely dead though, Martin Lilley resurrected the nameplate for a run of 10 cars under his new ownership from April 1966 through January of ’67. Despite the end of this final run of Griffiths, TVR’s link with American V8s was not over, it was to be continued with the soon to debut Tuscan.

Today. Today the Griffith is a major collectable. Perhaps it’s because of rarity, or maybe because of its out-of-the-mainstream image, but those who want them are willing to pay handsomely for the privilege. Fair-condition (running, reasonably safe to drive) routinely sell for $17,000 and up. Fully-restored versions go in excess of $36,000. TVRs, on the other hand, sell for one-third that amount in equal condition.
If you are looking for a Griffith, look very carefully and take someone along who knows the flaws. These cars were constructed in such a way as to trap moisture in the metal frame, causing structural rust. They need to be examined very thoroughly.