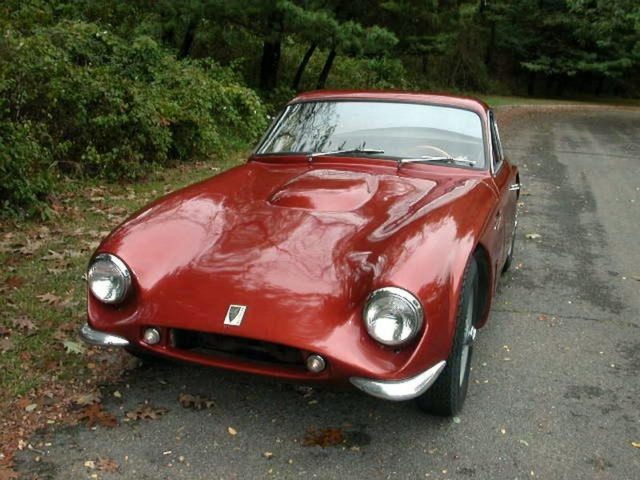 The legend and Jack Griffith. Three Granturas ran at Sebring in 1962, and two of the drivers (Gerry Sagerman and Mark Donohue) happened to maintain their personal cars – a Grantura and a Shelby Cobra – at the New York shops of Jack Griffith.
In the early 60s, Jack Griffith owned a Ford dealership in Plainview, Long Island. He was doing very well, especially when he was allowed to sell the new Shelby Cobras, a vehicle close to Jack’s race-enthusiast heart. In fact, Griffith owned one of the factory-prepared Cobras and raced it himself, although not all that successfully.

Also on Long Island was a friend of Griffith who was a TVR dealer. TVRs, by all measurement, were not major contenders in the high-performance arena. They were small, just a tubular frame covered with a fiberglass body. Power for the cars came from an 86-hp, 1.6 liter four cylinder engine. This is not to say, however, that the TVRs were slow. They weighed only 1.650 pounds and were capable of 0-60 in around 10 seconds, quite sprightly for the era.

Legend has it that one day at the shop, just for fun, Griffith decided to see if he could drop the Ford V8 from Donohue’s AC Cobra into Sagerman’s TVR. It didn’t quite fit, but the idea had been planted in Griffith’s mind.

Griffith’s crew wondered if the Cobra’s 289 Ford V-8 fit the TVR. It did. Seeing the potential, Griffith asked TVR to supply Granturas for Stateside installation of the Cobra drivetrain. Desperate for cash, TVR agreed. Jack Griffith and his TVR-dealer friend installed the engine successfully and found the car to be very exciting and enjoyable to drive. In fact, Griffith took the “prototype” to Ford to discuss the possibility of providing drivetrains for production versions of the car. Ford accepted the idea (after all, they were providing drivetrains for Shelby and for Sunbeam by this time), as did TVR of England. Bodies and engine/transmission assemblies would be shipped to Griffith on Long Island.

The Griffith 200. The New York Automobile Show of 1964 played host to the first Griffith 200. It was almost identical to the standard TVR except for the added hood bulge and dual exhausts. No trunk opening existed on the TVR or Griffith, since the stiffness was required for body integrity.
Drivetrain apart, the new model was a Mark 3 Grantura with stronger, wider wire wheels. Despite this massive influx of power, the car remain largely unchanged from its humble Grantura beginnings. Suspension pick up points were beefed up, and spring damper rates were changes, but that was about it. Even the humble diff that originally came from an MGA or MGB was unmodified. While performance was outstanding, fit and finish, as well as reliability suffered. This was to be expected with the hot-rod treatment the car was receiving and the rapid rate at which they were being turned out. TVR’s reputation suffered from this, but improvements were on the way.
For a price tag of $3,995 the Griffith buyer got a 200-hp Ford V8 (The hood was bulged to clear the enormous engine), four-speed Borg Warner T10 transmission, front disc brakes, full instrumentation, roll-up windows and a 0-60 time of 6.9 seconds. Optional equipment offered was the high-performance version of the 289, putting out 271 horsepower. Griffith’s advertisement for the high-performance version stated, “You dreamed it….we built it….The Griffith…powered by Ford….0-60 in 3.8 seconds…145 mph!”. Like all early TVRs, the Griffith had little cockpit or luggage space, a very hard ride, and typically casual “cottage” workmanship.

Early Driving Impressions. Magazine reviews ranged from enthusiastic to damning about the Griffiths. Some testers were very impressed and found the cars to be relatively easy to handle, although rough riding. Autosport magazine gave the car high marks for stability and acceleration and braking.
On the other hand, the Griffith’s extremely short wheelbase caused the car to virtually pivot around corners under high speeds, causing loss of the rear end. A number of original owners were killed in the cars, no doubt the result of limited skill, alcohol and an overall failure to keep the tires adhered to the road. That aside, the consistent theme of road tests of the period was one of virtually unlimited power.
Inside, the Griffith was spartan in appearance and feel. It was rough riding, cramped, ventilation was limited and the 289’s exhaust cooked the passengers. Performance comes at a price.

A second opinion. Following another test drive the response was that the car – then and now – was loud, flimsy, rattly and very, very, very light. The steering was extremely quick, the brakes “grabby” and the heat nearly unbearable. The seats were uncomfortable and there was no air movement in the car. It was, however, a blast to drive. Acceleration was astounding and each gear had long, long legs – 70 in first, 90 in second, etc. It was “quirky” in its handling and you had to pay attention at all times or you could get in trouble. The potential for disaster was there, all right, but any competent driver was aware of it. The car could quickly reach its limits, however, so one always needed to focus on what was going on.
We don’t think the Griffith would have sold well in the long run, even had there not been financial failure. It simply couldn’t compete in features and luxuries with Corvette, Jaguar and the like, and it was too expensive for the basic sports car market. Besides, it was pretty homely looking. But, boy, what a ride!

(To be continued to 2nd episode)