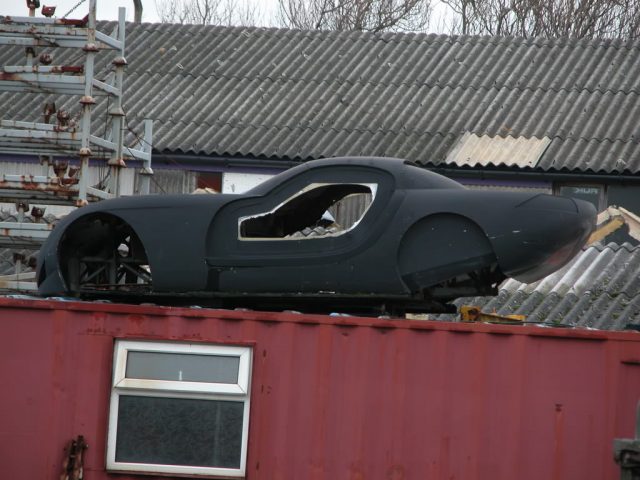 TVR Project 7/12… TVR Speed12… TVR Cerbera speed12. The subject is quite complicated. TVR developed its project for a big race TVR with several modifications which actually generated some different “vehicles”: mock-ups, race versions, street versions. Here is a brief portrait of all cars that were created.

TVR Project 7/12: the concept and the first mock-up

During the ’90s TVR decided to build the fastest road car in the world and to start a race-program for English GT Championship. The first result of these studies was a mok up which was introduced in 1995 and progressively it was updated until 2000.
The car should have competed with the likes of the Porsche 911 GT1, McLaren F1 GTR, Lister Storm and lots of other competitors. TVR used modified Rover engines for quite a long time but at that time Peter Wheeler decided to design or comission engines for themselves.
Engine: The heart of the 7/12 would have been a 660 bhp V12-engine, an incredible 830 Nm maximum torque. Al Melling was charged with the project of this mighty unit. Its main features were aluminium alloy block and heads, and a single overhead cam per bankwith two valves per cylinder. The entire engine weighed only 160 kg.
Chassis: the 7/12 is based on an all-new spaceframe backbone chassis, which hintsat the Cerbera GT race car. It would include a full FIA roll cage, whichwill stiffen the body. The look was dictated by the GT racing rules. It also had to be road-legal, which meant that all the rigorous tests (like crash) had to be passed and a few road-homolagated examples would have been built. But just as with the Porsche 911GT1 racing was the key.

Following images: the mock-up pictured above was completed for early official shows.

The TVR Project 7/12 was shown for the first time at the British Motor Show in October 1996 (picture below). The factory hoped to enter it in the 24 hours at LeMans 1997:

After the show the car went back to Blackpool for further developments. The first mockup of the TVR Project 7/12 was then laied aside in poor conditions in order to built the working cars:

A second mock-up was completed with its own mechanical parts but still without engine.

To be continued to EPISODE 2