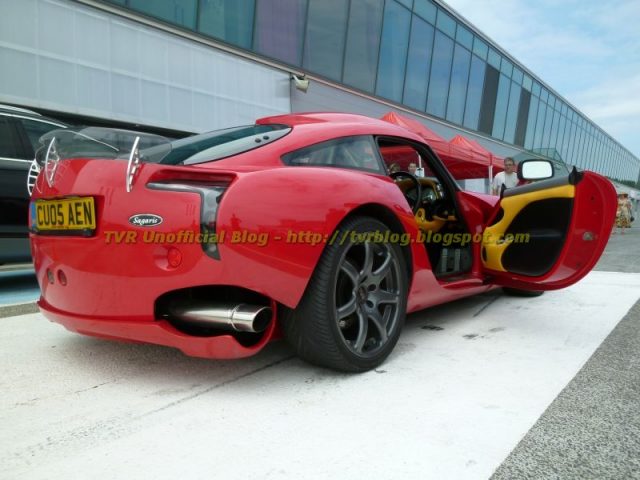 I went to the Nogaro track (SW France) to drive for 3 little laps a TVR Sagaris.
The car is an import from the UK. It’s a RHD, not homologated in France for road use, so it has its british plate on still.
It belongs to the company “Drift’n Grip” (driftngrip.com) offering track sessions as driver or passenger on Sagaris, M3, S2000…
I am a TVR fan since I was young, discovering the S3 series at that time.

After a first lap with a passenger the car wouldn’t start again because of a fuse failure (due to overheating ?). Baptiste Lassagne from Drift’n Grip got the car repaired and removed the bonnet from the engine to cool it more easily.

Impression
The car is very low and quite exiguous. My helmet was bumping the roof or the door window.very often.
First gear, no stop allowed since the car may not restart again… Gears are very hard to engage and to change. Pedals are very firm and the brake pedal has very little depth.
First turn, the car is really screwed to the track.
First straight, 3rd and 4h gears, and have to brake and turn : the track has been cut by half which is disappointing (full length 3.6km)
Second straigth.
Second lap and try to push a bit more : the engine sound is amazing ! Each upper gear kicks you forward. Vibrations are very present too.
Third lap and have to stop 🙁
Would have loved to go for another 15 laps to push my limits higher (not the car’s limits since I believe they’re far higher than mine), 3 little laps is too short….
But, this was the first time ever I drove a TVR, and this is exiting !

Conclusions
This car is a pure race car (chassis, roll cage, brutal behaviour, tough box and pedals…).
This day on the track, Lambos, Ferraris, Audi and a Porsche GT3 were running : Instructors said there are only 2 true race cars on the track the Porsche, and the TVR… all others are civilized cars….
To my opinion, the Sagaris could hardly be an everyday car, and this might be one of the reasons it was never legalized in France for road use.