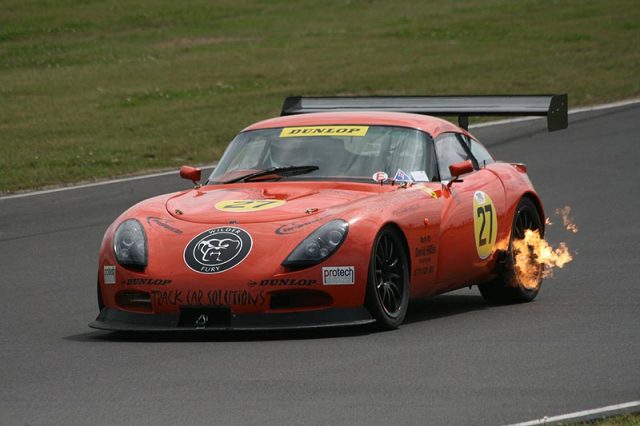 You’re in the best aim for a motoring enthusiasts: you just can’t hold out the perfect tarmac of a track. So your car is for trackday use including ring trips and weekends. But there’s also another “problem”. You don’t think a 430 Scuderia, a 997 GT3 RS 3.8 or a Lambo Superleggera are the best. Define this a call to the British ones, to the front(-central) engines, to those ones which never have the ESP button. But your need is a TVR: small, brutal, ancient and incredibly fast.

The current question: “some T350 owners are suggesting that it is a better car than the Sagaris, clearly at circa £25K as opposed to £40k it is attractive. Can someone explain why a Sagaris would command an extra £20k and would a T350 still be a capable track car?“

Here are some conclusions on this very interesting matter:

1) The Sag is undoubtedly the better car as standard; as much as I love the 350 I have to admit it! I’m sure if you spent enough cash on the engine, suspension and brakes you could make a T350 as good/better than a Sag, but I’m sure it would cost a fair bit. In my humble opinion, they are two quite different cars in terms of styling and what they offer as a package. The T350, to me, is a bit more of a GT whereas the Sag is far lairier to look at and seems more track-focused. I’m sure plenty will disagree with me though!

2) As a T350 owner the Sag represents the last best effort of the factory with the latest in chassis geo /settings. That said it is also considered by some to be compromised but this would depend on what use you had planned. The T350 is also compromised from the factory too imho as it has too soft springs for anything other than billiard smooth roads as stock. There are lots of options out there for a T350/Sag to have thier factory defaults altered but if a track car is your primary aim the stock Sag is probably further down that road than a stock T350. So that +15k could go a long way to converting a T350 into a suitable track tool, ie Powers 4.5 and Nitrons/geo etc. Tyre wise the T350 is more limited than the sag for size upgrades due to less room in the wheel wells front and back and it wont have the wider track/last(best) chassis wishbone locations of the Sag but if your not the stig/ayton senna/etc you might not notice. aggressive = Sag. Timeless classic=T350

3) What I’m saying is if you want a TVR, get one. Sagaris is better, rarer, and more likely to hold it’s value (if you’re into that kind of thing), than anything else you’ve mentioned

4) Driver input would have far more influence, though I would guess standard cars, same driver, track tyres it would be: GT3 RS, Sagaris, Exige S, T350.

5) the Sagaris and T350 actually drive quite differently. The Sagaris is probably the better car for outright track work, but only you can decide whether you prefer the styling over a T350’s cleaner lines. Drive them both and ‘feel’ their personalities, the T350 is more nervous and feeling more ‘on it’ intially, but that is because the Sagaris is slightly better honed. You can spend a few bob on enhancing a T350’s suspension and get a very good handling car. Neither will handle like an Exige though. BTW. If you test drive a Sagaris make sure it has the right gearbox/diff combination.