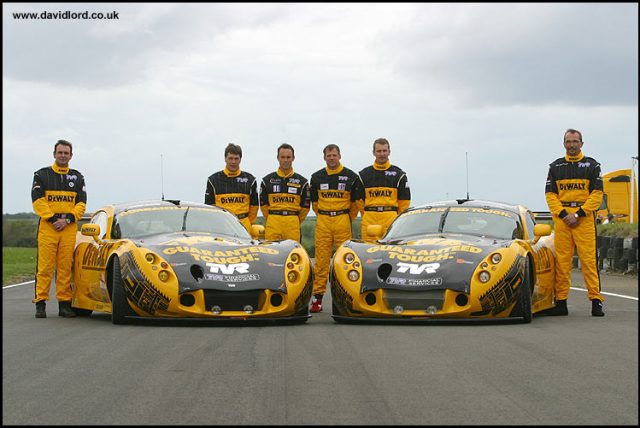 Two more cars on the track. Stanton and Race Sports Salisbury were back with a renewed attack, this time with a pair of brand new T400Rs – target Le Mans!

The opening task was to take one of the new DeWalt liveried cars to Sebring – and impress the ACO and finish the race. Despite suffering huge cockpit temperatures (a result of a misjudged decision to leave the car’s fixed windows in place on a very steamy day) the car had just one problem, a faulty battery at the very end of the race, and it finished a hugely impressive sixth in class.

Back in the British Championship The Rollcentre Racing’s T400R was sold to an ex-Tuscan Challenge racer, Gareth Evans, and was now in the care of Burt Taylor’s Countdown Developments.

Eclipse Motor Sport’s T400R had to start the season against two Mosler MT900Rs of Rollcentre and Balfe Motorsport. But in Mid-season it scored a famous win at Silverstone (along with Ben McLoughlin) to win the historic British Empire Trophy. That race also produced a result which is now unlikely ever to be matched, with the Peninsula and CDL cars following the Eclipse T400R home for a TVR clean sweep of the podium.

At Castle Combe all five cars then in existence started the race. The 1-2 was a clean sweep for the DeWalt pair, returning home after a disappointing Le Mans which saw one car eliminated early in the race and the second finally succumbing after a huge effort by Michael Caine. By now there was another significant T400R fact to note. Richard Stanton had piloted all five cars so far built in race action – starting out with the first chassis, sampling the Rollcentre car at Suzuka and completing the 2002 season aboard the Eclipse car, before coming back with his De Walt liveried pair.

Back to the race action: the Eclipse T400R won at Oulton Park. The final round of the 2003 championship was at Brands Hatch and there were three cars still in with the chance of a championship win. The Eclipse TVR was the outsider: both Moslers would have to fall by the wayside if the Blackpool rocket was to score a famous win. But the the DeWalt cars were back, now passed from Richard Stanton to Bob Berridge, and it was Berridge who played the first decisive role. Lap two, Turn One, Paddock Hill Bend and there was decisive contact. When the dust settled it was game over for the Balfe Mosler.

Eclipse meanwhile was flying high and looked set to make life exceedingly difficult for the Rollcentre Mosler but a Marcos Mantis chose the wrong gap to go for and the subsequent tap sent the T400R into the barriers.

Eclipse’s car scored a win at Oulton Park and a second time in a Britcar GT Open race at Donington Park.

There was however a new chapter: RSR Racing took to the track a pair of brand new, copper-painted T400Rs funded by Lawrence Tomlinson and pedaled by the team owner and the evergreen Nigel Greensall. The DeWalt cars were now in the hands of Gareth Evans, under the banner of Chamberlain Synergy Racing. The cars appeared at Sebring once again in a beautiful purple livery and in a new ‘wide-track’ guise. Both arrived to the finish and some time after, in June, the scored a very interesting result at Le Mans 24 Hours: 8th and 9th in their class.

At Donington Park for another FIA GT round one car each from the Chamberlain Synergy and RSR squads were at the show. The TVRs also made their presence felt in the LMES with both the purple cars and the (now once again yellow and black) Racesports car both scoring good finishes. There was the potential for more however, but an Audi R8 destroyed one of the purple cars at the Bus Stop at Spa.

Lawrence Tomlinson had bought the two purple cars and these, plus his two ex RSR cars, would form the rolling stock for the ‘new for 2005’ Team LNT – all in narrow track guise. The newly purple and orange liveried TVRs would perform a joint British GT and LMES season.

It started with a two car entry for Sebring which sadly saw a catalogue of misfortune ruin the team’s opening weekend. In the British Championship the cars were super quick, but the Scuderia Ecosse Ferraris were just a wee bit quicker and it was with a sense of frustration that the team withdrew from the series mid season, after falling foul of the notoriously tough (especially for cars with a side exhaust outlet) noise restrictions at Castle Combe. LMES was good for them with an impressive and historic 1-2 finish in the opening 1000km race of the European season at Spa Francorchamps. They followed this up with a podium finish in the GT2 class at the Tourist Trophy meeting of the FIA GT Championship at Silverstone.

Meanwhile though came the lowest low – a quite unfathomable decision not to invite either of the Team LNT cars to join the entry for the Le Mans 24 Hours.
The Peninsula TVR squad meanwhile was pressing on, in the very first of the T400R chassis, with a full LMES season of its own and it was the Peninsula / racesports name that came out when the ACO opened the golden envelope containing the entry list for the 24 Hours. Despite a troubled race the Hartshorne / Stanton / Piers Johnson trio finished the race and only failed to post a classified finish by just a couple of laps. In the LMES, they raced steadily and efficiently and posted a pair of sixth places plus a pair of sevenths.

Where are the now the TVR T400rs?
Rollcentre: is still with Bert Taylor.
Eclipse Motorsport: is still with the team.
Ex-DeWalt, ex-Chamberlain Synergy, ex Bob Berridge / Gareth Evans: now reside with Team LNT, alongside the ex RSR pair.
Chassis no.1: remains in the ownership of John Hartshorne.