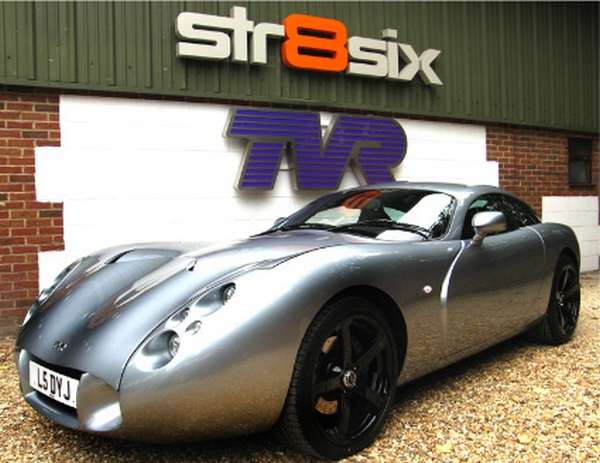 Str8six, one of the best place to have your TVR serviced (as people at the company are former TVR factory’s technicians), are offering Supercar collectors an opportunity to invest in one of the rarest and most desirable British Motoring Icons: the unrepeatable TVR T440R. Interested in this car? It comes for 150.000 £. Ask people at Str8six if you want to become the owner of an extremely rare and wonderful TVR.

Lesson: the TVR T440R
The T440R was derived from TVR’s T400R racecars, built for endurance racing at Spa, Sebring, the Le Mans 24 Hours, and the British GT series, in the hands of teams such as Eclipse, Peninsula, Chamberlain and LNT. The T440R was the only one of the 4 road cars TVR created to obtain FIA homologation, which was built to the 4.2 litre specification.

Engine: Unlike the other three cars, the TVR Typhons, (which were conceived to run 4.0 litre supercharged engines with 6-speed sequential gearboxes, but which were never sold with this powertrain), the T440R was specified to run with a normally aspirated engine – with a larger capacity than the 4.0 litre race cars. And so it does, being equipped with a 4.2 litre engine incorporating a gas-flowed cylinder head, steel crankshaft and conrods, a carbon fibre air box with 6 upper injectors (12 in total for the 6 cylinders), and bespoke exhaust headers – to mention but some elements of this very special power plant. Most of the engine components are derived from the TVR race programme, but the engine is detuned to 440bhp for road use and durability. It features a large bore exhaust which exits at the rear, rather than on the nearside like the racecars – and do not expect this to be a quiet system!

Chassis: The chassis for the T400R racecars was originally designed for 24 hours endurance racing using sophisticated CAD/CAM software. Each was then hand-built by a specialist team.
The T440R’s chassis was fabricated by one member of this team on the same jigs as used for the racecars. It is constructed from seamless tube and features the same engine bay-strengthening ‘tower’ design as the racecars. The only revision for road use was the elimination of the cockpit cross-bracing, although the car does feature a fully integrated rollcage – fully leather-trimmed.
The chassis/body construction is complex. It employs a flat under-floor, constructed from resin-sandwiched aluminium honeycomb, to which the tubular and square section chassis is bonded and bolted. A separate carbon-fibre tub is then bonded to the chassis and finally the car’s carbon-fibre bodywork is bonded to the tub and to the flat floor. This ensures the car is as stiff and as light as possible.

Body: A great deal of attention was paid to the T440R’s aerodynamic bodywork, which – in combination with the front splitter, virtually flat floor, and rear diffuser – endows the car with a very low coefficient of lift and a drag co-efficient of only 0.32. The aero package provides the car with astonishing stability. The handling is predictable, confidence inspiring and hugely competent – in skilled hands and if you are brave! The car has a power to weight ratio which ensures 60 mph is reached in well under 4 seconds,
and the V Max is nearly 200 mph.

Cockpit: The T440R’s interior reflects its racecar origins, and a distinctly minimalist style pervades the 2+2 passenger compartment. The trademark TVR style is showcased to great effect. Beautifully machined aluminium componentry contrasts with the polished carbonfibre structure of the car, which is left on show. The interior is focused and purposeful, but with an aura of quality, conveyed by swathes of craftsman-trimmed, Andrew Muirhead Scottish hides in black with red features, matched by black carpets bound with red leather.

The car is a 2+2 coupe with generous accommodation.
The fully leather-trimmed front seats are not race buckets but are designed to provide both hold and comfort on track as well as over long distances. They are equipped with a choice of either lap and diagonal or full race harnesses. The rear seats – in carbon fibre and leather – are suitable for children or small adults and also have effective safety harnesses. The boot space is generous for a car of this type and accessed via a heated glass, opening rear screen. The car is equipped with air conditioning, but it is a TVR – so this technological tour de force has no traction control or ABS!

The TVR T440R “L5 DYJ”
This specific car was originally built for Lawrence Tomlinson, the owner of LNT Racing, but perhaps better known as the driving force behind Ginetta Cars. It was intended by him to be used primarily as a road car. When he closed his TVR Racing interests, he sold the car to a lady who is recognised as an absolute TVR afficionado. The car has just emerged from a meticulous 6 months re-commissioning programme. The bodywork has been fully refurbished and subjected to a total stripped down, glass out repaint in Spectraflair Titanium by the highly respected Surface and Design company. Their works are in the former TVR factory at Blackpool,and their staff includes many of the men who originally built the T440R. The technical reinstatement was carried out by Str8six of Lewknor in Oxfordshire, whose staff also include ex TVR specialists from the race-engine division. The work could not have been undertaken by better qualified personnel, and Str8six are keen to be involved in the future care of this awesome driving machine – whether it remains in the UK or not.

The number of production cars constructed entirely of carbon-fibre can be counted on the fingers of two hands. They include the McLaren F1, the Ferrari F40, some Koenigsegg and Pagani variants – and the TVR T440R.  The Le Mans race cars, and the 4 homologation road cars, cost TVR an inordinate sum of money to design, develop and build. And the T440R is the road car that is closest in conception to the actual racecars that campaigned at La Sarthe in 2003, 2004 and 2005. All the TVR entries completed the distance in the last two years. Shades of Jaguar – even if TVR did not win Le Mans outright.