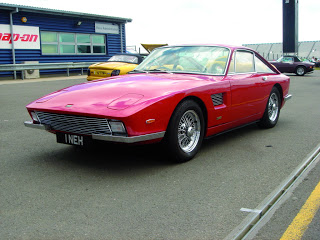 In the beginning of the Sixties TVR staff decided the time to climb towards the high peaks of eccellence among best British sportcars manufacturers had come. At that time TVR was still a very small company, and Trevor Wilkinson had already left. New managers at TVRs thought that the company would have been totally able to build a great supercar with a strong reputation (like Jaguars, Astons…). It should have been based on a classic TVR chassis but with an Italian coachbuilding.
That wasn’t by chance. Almost all manufacturers knew the great value added of the Italian coachbuilding: Pininfarina, Scaglietti, Bertone, Vignale, Touring Superleggera, Zagato, Allemano, Ghia… and Fissore!

In spring 1963 TVRs people met in Blackpool, under chance circumstances, Trevor Frost, a designer who was known in Italy (at Fissore) as Trevor Fiore. Chatting in a pub, the design of the new car came out in a very legendary way even if they had to wait still for more than a year before the TVR Trident project could begin.

Trevor Frost “Fiore” succeeded in convince people at Carrozzeria Fissore to build two cars: chassis no. 1 and 2. Over a Grantura/Griffith chassis a very wedged body (made of steel with aluminium bonnet) was created. Under the bonnet a V8 Cobra was installed: 4,7 litres, 270 Hp, 4 speed gearbox.
The TVR Trident was officially introduced at Geneve ’65. Visitors and motoring press liked so much the car that it was even considered as the most beautiful one in the world of that time. Many orders came suddenly so soon after Geneve Autoshow end two more TVR Trident were ordered. Carrozzeria Fissore built a coupé (car. n.3) and a Spider (car n.4). Tyey should have been used as test car in order to develop the production model.

Killed in the cradle

Poor sales of the TVR Grantura and TVR Griffith didn’t allow TVR to have enough financial energies to fund the production of TVR Trident project and in 1965, even before car n.3 and 4 were completed, the company fell in bankrupcy (for the second time). Arthur and Martin Lilley came into the scene and restarted production by Christmas 1965.

What happened to the TVR Trident? While the Lilleys were approaching TVR, the rights to the Trident came into a deep fog. Who owned it? TVR? Carrozzeria Fissore? Or Trevor Frost? It’s unclear but a local TVR dealer, Bill Last, succeeded in buying the rights to produce the Trident. So he commissioned totally a new car to Fissore.

Very different from the “original”

The new Trident had a Austin Healy 3000 chassis and a fiberglass body. The style was the same of the original car. It came into production in 1966. Until 1976, Trident Cars and Trident Motor Company built nearly 130 units.