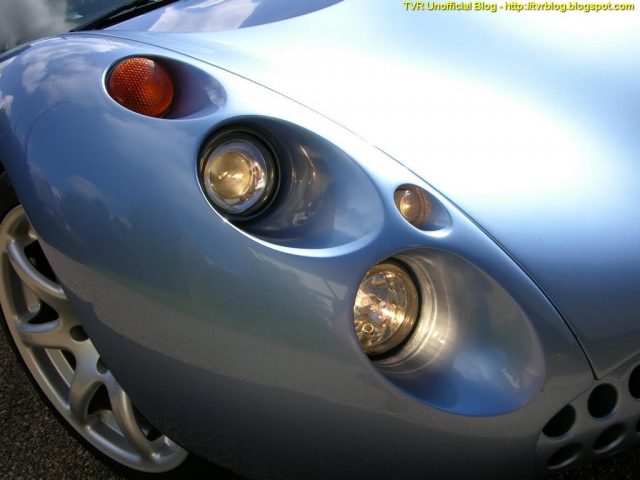 Some (wonderful) shots on the particoulars of a TVR Tuscan MK1 allow me (and any of you who’s trying to explane to a friend why a TVR Tuscan is completely different from any other supercar) to point out the main features of the body of the car, which are unique in comparison with any other competitor.

Front lights: the style is totally individual and full of personality as other manufactures summarize all lights with an unique, big element.

Rear lights: none brand positioned three lights on the bottom of the tail close to exhaust. Ferrari, whose double rear light was a trademark since Fioravanti’s idea with his 1975 308 GTB. Current 599 GTB and 458 have a sole light. TVR Tuscan’s rear light are small like a Maserati 300S of the Fifties. It’s like none can cope with a TVR.

Wheels: I think the best looking wheel in motoring history is the 17″ Cup wheel of the Porsche 964 (I personally have own one as footrest in my living room). The seven spoke wheel of a TVR, is a magic recalling to the style of TVRs’ wheel of ancient models. So simple, so curvy…
Side mirrors: the only one who dared use the “TVR way” for door handles was Alfredo Stola on his Ruf RK Coupé Studiotorino. Nice, without any doubt. But when you crib an idea, it’s impossible to make her appear better. That’s a TVR trademark.
Instrumentation: the cluster of the TVR Tuscan MK1 is a work of art. It’s cause you such sensations that any other car isn’t able to provoke.
Pedals: there isn’t a need to waste words. That’s simply an incredible ancient components. It was greatly used on Porsches until 993. Then 996 appeared and things started got worse.