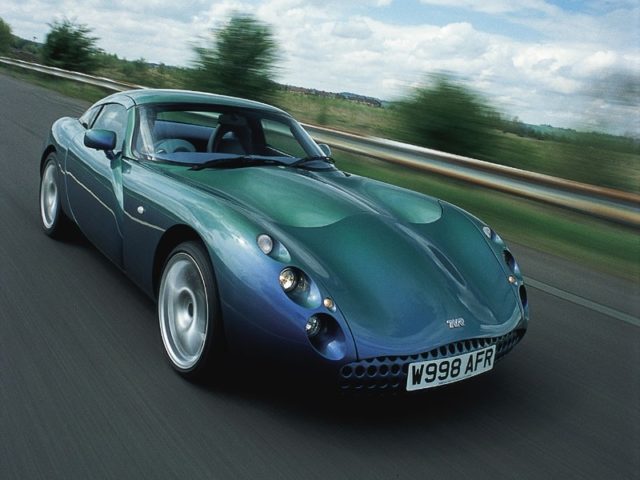 The original TVR Tuscan Speed Six was introduced to the public at the 1998 British Motor Show and went into production in March 2000.

The TVR Tuscan Speed Six is in essence a convertible in which two people and their luggage could go on holiday for a month with creature comforts like air conditioning and power steering but without the car weighing much more than 1000kg. It has TVR’s own straight six engine and has a novel roof design whereby, despite looking like a fixed head coupe, it is able to stow its roof and rear window in the boot, while still leaving room for luggage. No computers have been used in the styling of the car and TVR’s team of stylists, led by Damien McTaggert but with the close involvement of Chairman Peter Wheeler, took two years sculpting the shape of this future classic.

There are a number of advantages in designing a car in the manner that TVR does. Sculpting and developing the shape solely by hand is an inordinately time-consuming business. Just as one only truly appreciates the lines of a car when one washes it, so it is TVR’s belief that one can only really get to grips with the design of a car over a long period of time. Furthermore, it is impossible to control a surface as subtly on a computer screen as when sculpting the car by hand. It is with this in mind that one should view the new Tuscan. When a vehicle is mass-produced the tooling takes longer to develop than the styling but that is categorically not the case here. The whole philosophy at TVR is that the shape of the car comes first so the constraints of conventional industry thinking have not been an issue.

As such, the philosophy behind the styling of the car has been that function and form have been combined and the result has been left on show. Many of the features that make this car extraordinary are there for sound engineering reasons but the simplicity and elegance of their form enhances the overall look of the car. For instance, the unusual bonnet arrangement, whereby the main piece of the bonnet is bolted into the car, is there for the reasons that it is in most racing cars. It is actually lightly stressed and means that one is able to duct the airflow very precisely. Furthermore, it is bolted into place and therefore can be manufactured lighter. One of the notable features of the car is the way that the shutlines run along the top of the car so that if you draw them, you draw the shape of the car. This shows its lines off to the best advantage but also gives a far bigger boot opening to make the roof much easier to stow in the boot.

While it might be possible to say that the exterior design of the car is relatively extravagant in concept, TVR has taken a minimalist approach to the interior. The very highest quality components have been used and once again, function has determined form. The curved aluminium top to the dash, for example, actually acts as one of the transverse strengthening beams for the car. The pedal box, again hand made from extremely high quality components, is left on show as it would be a shame to hide craftsmanship like it and it also serves to make individual fittings for customers that much easier.

The original thinking of TVR’s team of engineers and designers has also manifested itself in the instrument binnacle, again manufactured in house by TVR. The advantage of this is that it enables one to link it to the engine management system which, combined with a number of other sensors, results in an extremely comprehensive range of instrumentation being available. Most immediately noticeable is the use of aluminium and brass which is a combination not seen in a car for many decades and which gives a sensation of warmth in the car without using walnut. It is also notable that a revcounter is not among the analogue gauges. This goes against the long-standing trend that in sports cars the revcounter should be to the forefront. However, with today’s engine management systems and the far wider rev ranges of modern powerplants, it is no longer necessary to monitor the engine speed all the time. Indeed, nowadays, even in racing applications, road speed is far more important. Yet for those who wish it, the graphical LCD display in the middle of the binnacle displays engine speed with just the two salient digits clearly visible, Formula One style.

Alternatively, a myriad of further readouts is easily selectable via a rotary knob and so, while the binnacle is extremely sophisticated, its appearance and operation is simplicity itself. These readouts include road speed, engine speed, fuel level, oil level, water temperature, oil temperature, ambient air temperature, oil pressure, fuel pressure and battery voltage. Minimum and maximum readings are recorded. Furthermore, on the top of the instrument binnacle is a graduated shift light which again takes its inspiration from Formula One racing cars. This whole binnacle adjusts up and down with the steering wheel so all the gauges are always visible. The jewellers’ quality of the exterior is matched by an extremely high tech interior with mapped stepper motors operating the water temperature and fuel gauges which learn as they go along and an aircraft grade stepper motor controlling the speedometer so that the instrument can keep up with the performance of the car.

All the rest of the switchgear is in the driver’s line of sight and once again is simple and elegant. With the exception of the heater and window controls, all these extremely expensive switches, as well as the radio, are mounted high up on the dashboard. A lot of thinking has also gone into the design of the seats which have the seatbelts built into the backrest so that the buckle always falls easily to hand. Furthermore, it is impossible to build a seat height adjuster into such a low car so the squab is removable. This is primarily so that the many TVR owners who take their cars on track days can more easily get into the car with a crash helmet on while benefiting from increased lateral support.

THE HEART OF THE CAR

The styling of the car has been very much influenced by the fact that it has a straight six mounted between the front wheels and it is this engine which is the heart of the car. Straight sixes have somewhat gone out of fashion because they cannot be mounted transversely, be it in the front, middle or back of the car. However, TVR’s adherence to the true course of sportscar manufacture, i.e. mounting the engines in the front to drive the rear wheels, makes it possible to use this most classic of sportscar engines. However, while one eye has been on the past in terms of the tradition of the layout, the other has been resolutely forward as the engine is very much up to date. Gruelling tests over the last three and a half years have shown its performance and reliability in Tuscan prototypes as well as the Cerbera Speed Six. Furthermore, in its doubled up, twelve cylinder form, the engine has seen competition in the mighty Speed Twelve.

One of the inherent characteristics of a straight six is that it can be perfectly balanced and this particular one has a capacity of four litres and a power output of 360 bhp. The all aluminium engine breaks away from the TVR mould in that it has a number of new features. It is the first of TVR’s own engines to feature a four valves per cylinder head which gives higher volumetric efficiency at high rpm which helps to give it its sporty nature. Furthermore it has finger followers which allow higher valve accelerations which improve the engine’s torque. It also has chain driven twin overhead camshafts for a quiet reliable drive. However, it also features a grade of high quality components and a level of high technology design on a parallel with its eight and twelve cylinder sisters. Like the Speed Twelve and racing variants of the Speed Eight engine, it has a dry sump which means it can sit very low in the chassis and that it doesn’t suffer from oil surge which can be a problem with the long sump required for this configuration of engine. In addition, the engine is canted over 15 degrees to enable the bonnet line to be even lower. It also features forged steel conrods, slipper style lightweight pistons, thin wall cylinder liners and a fully counterweighted nodular iron crankshaft.

The chassis is based on that of the Cerbera but in this case is 8 shorter. This means that it has improved interior room over the Griffith and Chimaera but as the overall thinking behind it, and indeed the dimensions, stem from the Tuscan Challenge racing car, the balance of the chassis between ride and handling is as well honed as ever. The other advantage of basing the chassis on that of TVR’s one make race series car is that there is probably no chassis anywhere in the world that has been so often and so comprehensively crash tested. Safety has been uppermost in the designers thoughts throughout the process and the roll cage, door beams and transverse aluminium tube are evidence of that. The brakes are 294 mm at the front with superb four pot aluminium callipers and are 273 mm at the rear.