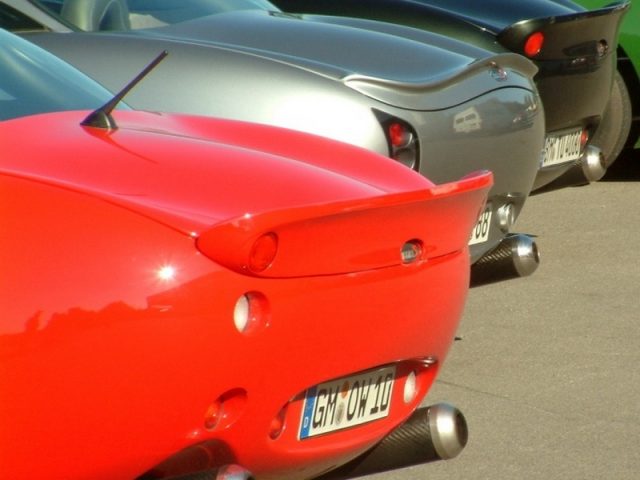 I already faced the subject some times ago and some useful info were given. But recently the matter came out with new strenght. The TVR Tuscan MK1 was introduced in 1998 at British Auto Show. The TVR Tuscan MK2 (here is an interesting test drive made by Evo Magazine) appeared for the first time at Birmingham 2004 (on sale in 2005). The question is: I’d like the TVR Tuscan but I’ve not any specific desire. So which are the differences among them? here are some useful informations for who is thinking about empting his (or her) wallet:

1) There’s a BIG difference between a MK1 and a MK2, mostly in terms of handling and build quality/engine quality. If you can afford it go for the MK2.

2) If you can afford a MK2 then push for one. I’ve owned 2 MK1s and have an unofficial MK3 (a MK2 with new dash and small rear spoiler). Rumoured to be better built the MK2 should give you less problems. However, a well looked after MK1 will also be just as good. Some people don’t like the front end changes to the MK2 where the cheese grater grill was removed. Personally out of all of the dashboard layouts I prefer the latest one, i.e. the curvy convertible style. You’ll be hard pushed to find one though as they only installed a handful into Targas (like mine) and obviously into the convertibles. The MK1 dash is much more pleasant on the eye than the letter box style (what were they thinking!).

3) The big handling differences are:

4) The differenes between the Mk1 and 2 are not massive. Ignoring the styling differences, the engines had a more sorted top end, but not as sorted as a recently rebuilt one. They have a slower steering rack and less agressive spring/damper rates, although they’re not a patch on any car that’s had a Nitron etc. upgrade.
With regards suspension mounting points being different, other than possibly the steering rack height, I’m not sure they’re any different? Only the Sagaris differs in this respect. The Mk2 still has the wrong scrub radius, however this is an easy fix on the Tuscan with a couple of wheel spacers. The Mk2 has differently presented electrics, but behind the scenes they’re pretty much the same.
The Mk2’s left the factory in better condition and with less niggles, however as others have said a well looked after Mk1 with a couple of choice upgrades will be as good as, if not better than a standard Mk2.

5) Genuine TVR Tuscan Mk1 S will always be more sought after though as they’re relativley rare, as well as them being the “extreme” version of an already extreme car.

6) The floating discs and AP calipers are the same as used on the Cerb and were only used on early Tuscans. The later cars had one piece discs, with the S spec cars having a larger diameter. (Many standard cars have had this mod done since as the larger discs are actually cheaper!?!) Later cars all had the AP calipers with the TVR logo cast into the outside face. Not sure about the door cards tbh, but think its a change done to all later cars.

7) the TVR Tuscan Mk1 is more twichy, steering rack of 2000 modell is most direct, i would prefer a 2003 or 2004 in the design of the 2000 model. Some improvents are done at the 2003 onwards. But buy according what is done already, mine is 2000 model, but with engine overhaul already, driving since 2 years, no engine issues, Throttle pods changed + 2 inspections thats all within 2 years from engine side.