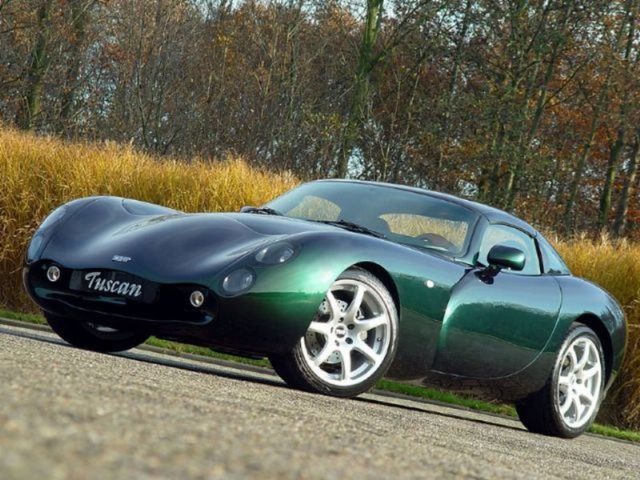 In 2005 second generation of the TVR Tuscan was introduced. It was introduced for the first time at 2004 Birmingham Motor Show as the most important debut of all for TVR: the TVR Tuscan 2 (or TVR Tuscan Mk2). The TVR Tuscan Speed Six originally went into production early in 2000 and since then TVR have built more than 2,500 of them. The changes to the car are significant:

The TVR Tuscan 2 also sees a return to the starter and stop buttons system seen on the TVR Cerbera back at the Motor Show back in 1993 and much copied by other manufacturers since. The door and window controls are developed from those used in the flagship Typhon range. Machined from billet aluminium the switchgear is as elegant as it is easy to use.

All TVRs on the Tuscan platform now feature new suspension geometry adding more castor and camber change to suit the latest tyre designs with the rack position having to move to maintain zero bump steer. While this has necessitated an adjustment to the rack height, the opportunity has been taken to use the electro-hydraulic power assisted steering rack from the Tamora and the T350, which has had its speed reduced by 10%.

The seats of the Tuscan have always featured removable squabs for additional lateral location but the seats have now been redesigned to make that level of lateral design permanent. As TVRs are all built to order, customers who prefer a higher seating position will be able to specify one as will those who wish for the extra two inches of legroom and headroom on top of the snugger seat arrangement.