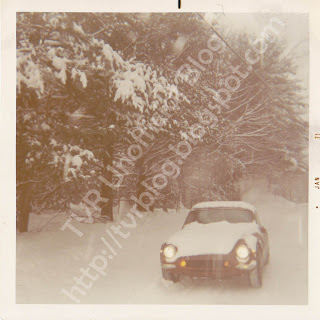 [Introduction: here is the car the enthusiast is talking about: the TVR Tuscan V8 MAL010]

It all begin one beautiful, sunny fall afternoon while driving my wheels of the moment, 1967 Pontiac Firebird, westbound on Rt 101A between Nashua, and Amherst, NH. As I was driving, I saw this TVR past me heading East. WHAT?? Was that??? You can imagine the reactions..I quickly pull over and made a “U-TURN”..I caught up with the driver of the TVR and pulled him over by flashing my lights..
He told me his name was Mr.Bebe, and that he worked as a salesman for Foreign Auto of Hudson, NH.. Yes, the car was for sale..

I just followed him right back to the dealership. By the end of the day, I had traded my 67 Firebird for this TVR. It created a public stir everywhere I went with it..people were as much taken with this TVR as I was. I drove it all over New Hampshire, even to the famous Loudon Speedway Motor track for a Granite State Corvette Club event. I was asked to drive it around the then original racetrack. It was funny as I has several Corvettes trying to keep up with me… Of course, the OEM tires on the car were not highly suitable for a real race. Being that they were Bridgstones, 185 SR15, they would squeal like crazy in the high bank turns. My nest adventure with the car, took many miles out Mid-West, into the Middle of America, where I had many moments of fun filled triumph while driving this TVR.

In retrospect, I knew very little about the car originally, except it was built in England by TVR. The car was shipped to a authorized TVR dealer in Long Island, NY. with no engine, no transmission.. All of that was added after the car arrived in USA..The original engine was a Detroit Ford 302, 4 barrel carburetor, a Ford Mustang radiator, which was totally inadquate for keeping the car’s engine cool while stopped in traffic`!! The transmission was originally made by Shelby of Ford, and the rear end was a 427 Cobra. The drive shaft connecting the transmission to the rear-end was extremely short..I mean extremely`! The car’s total weight was just around 2000lbs, give or take. It held 10 gallons of fuel and didn’t get great mileage when all 4 barrels were open! Which you could hear when the last two barrels opened! Shifting was a DREAM!! All you had to do was flick your wrist whichever gears you wanted it to be in. Heaven help you while holding the clutch in while at a light~!! It’s powerful push would make your knees shake in a short time. You could almost snap your passenger neck while taking off in 1st, 2nd and 3rd gear..it was almost like lightening, extremely fast. I can’t say how many big block Corvettes I beat with it, GTO Judge, even Jaguar.

I have but only one original picture of the car while I owned it..as this was, like the radio, too much fun driving to stop for photos..lol
I still have the spare OEM key for the TVR, It’s exactly as the one shown in the photos of the car..:)