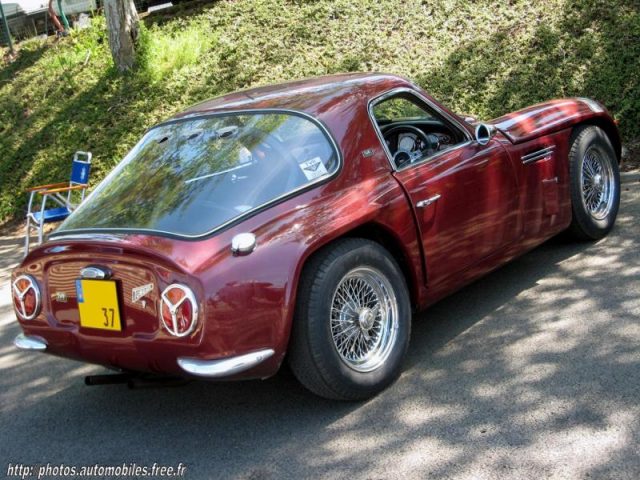 We asked Marshall Moore, President of TVRCCNA how is possible to distinguish between an early TVR Tuscan V8 and a TVR Tuscan V8 SE.

How you can differentiate between an “SE” and a non-SE are the following:
1) First of all, the “SE” should have the small rectangular SE emblems on the roof sail panels just behind the door windows
2) Secondly, an SE page was an option on the TVR Tuscan V8 range and included limited slip differential, 6″ wide rims on the wire wheels, laminated front windscreen, leather trim steering wheel, two-speed windscreen wipers and the high performance 271 bhp version of the 289 cu. in. Ford V8 engine with a single 4 bbl carburettor and solid lifters, compared with the standard 200 hp hydraulic tappet engine.

TVR Tuscan V8 200/015
That particular car in the image displayed has chassis 200/015. It’s a former Martin Lilley car and it is a true Tuscan SWB V8 SE. It was originally used by Martin Lilley and was the car tested by Motor magazine in May 1967 and was also featured in Peter Filby’s book “Success Against the Odds”. It was one of only 28 short wheelbase TVR Tuscan S produced, all but six of which reportedly were sent to North America. This car had been owned for a number of years by Farrell Preston in the US before being sold lin 2008 to a new owner in Europe.
It is also the last of the TVR Tuscan V8 with short wheelbase (015) before the first long wheelbase (LWB) version with chassis number 200/016 or LW 001 was built.