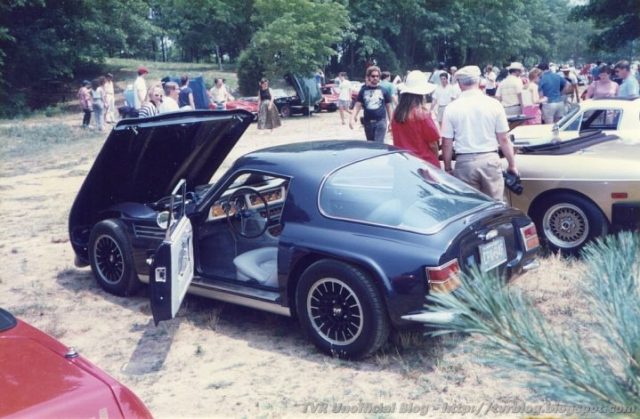 Along with the continuation of the TVR production with the TVR Grantura MK4, the Lilleys, who had acquired TVR factoty in 1965 started working on a new model which were the result of coupling the TVR Grantura and the TVR Griffith 400. Introduced in early ’67 it was called Tuscan. The Tuscan had to live up to the staggering performance figures of the Griffith, yet be the refined sportscar that would establish TVR as a true power in the exotic car market.

The new cars (chassis numbers start with 200-001 …) had a short wheel base (SWB) body. They were quite similar to the Griffith 400 they replaced (despite a more luxurious cockpit). Like the other TVRs, the TVR Tuscan V8 was a two-seat fiberglass fastback coupe on a tubular steel chassis. The first one was built on a 85-in (216 cm) wheelbase.
It used the same 4.727 Ford V8 engines as the Griffith (which was similar to the engine available in early Ford Mustangs) and connected with a 5 speed gearbox (also Carroll Shelby did so in his first small Cobras). It was a 4-barrel carburetor, which was avaiable in two steps: 195 and 271 hp. In this last configuration it and was capable of propelling the car to a top speed of 155mhp.

The TVR Tuscan V8 was newly distributed in the U.S. by Gerry Sagerman but couldn’t escape the Griffith’s poor reputation. Only 28 were built, some with the 195-horsepower Ford 289, some with the 271-bhp engine. All but four were sold in America.