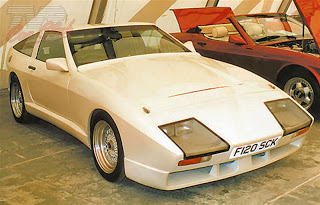 During the mid 1980’s TVR were looking to develop new models to replace the Tasmin Series and the S Series. The White Elephant was an attempt to bring the Tasmin up to date and make her relevent to the 90’s and the onset of the new Millennium. In 1988 TVR produced a prototype using an Australian Holden  5 litrrs V8 engine (US spec Borg Warner T5 box and a standard Jaguar Salisbury diff). The 5 litre V8 is said to have been developed to 350+ bhp with around 400 ft/lb of torque. The car was built by John Ravenscroft, Neill Anderson and Peter Wheeler  (it was commissioned by himself) and for used by TVR Managing Director of the factory for a couple of years.
It was based on a developed and modified SEAC chassis and a Tasmin FHC stripped down and chopped body shell. The car had a totally unique body comprising of a fibreglass inner shell which was covered by a thick coat of heavy modelling foam which in turn was over-coated with the finishing layer of fibreglass to give the Elephant its unique shape.
The TVR White Elephant was a testbed for the new Walkinshaw HSV Bathurst racing engine, which was being considered as an alternative to the Rover V8. It was capable of 185 mph (300 km/h).

It was eventually decided that the prototype’s rounded-off Wedge shape was still too dated for the 1990’s and that Australian engine logistics could also be a problem – so the project was shelved and 12 months later the new TVR Griffith, which was based on an S Series chassis and running gear,was born…

The Elephant was rescued from the ‘TVR Graveyard’ at the rear of the Factory in July 2004; just two weeks before Peter Wheeler sold TVR to Nikolai Smolenski. She’s actually under a total restoration to come back to its pristine conditions. 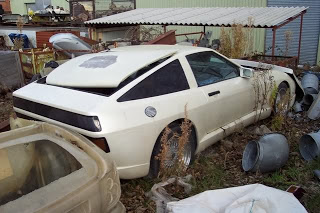