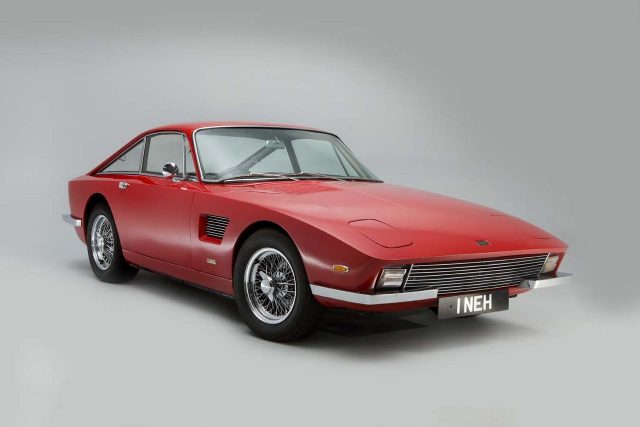 Speaking about the TVR Trident, we published some images of the most known car, the third unit built and painted red. Now, thanks to Mr. Marshall Moore, President of TVRCCNA, here is a full documentation of the original four TVR Tridents:

The first one was the first prototype coupe (serial number 400/65/002) which was the show car at the Geneva Auto Show in 1965 and the New York Auto Show in 1966. It was originally painted yellow but was resprayed Riviera Brown (see image above). Current owner Joe Hart of California, USA, has owned this car since 1966.

The second coupe, (serial number 400/5/004) was displayed at the Geneva Auto Show in 1965. It had been in the collection of university professor Hank Kelly of Virginia, USA and was purchased by Chuck Linn in 1988 following Kelly’s death. Lin began a lengthy restoration of the Trident and later sold the car to Jos Wymeersch of Belgium who completed the restoration. The car was originally painted champagne.

The third coupe, and perhaps most famous one currently, was the 1965 Turin Motor Show car and the only Trident to have an all steel body. Current owner Norman Hawkes (UK) purchased the car (serial number LWB107) in 1986 after which he completed a full restoration. The car is red with creme interior.

The final prototype TVR Trident is LW021, and was the only convertible Trident produced. It was a one-off prototype and has been fully restored by previous owner Neil Lefley(UK) and is fitted with an automatic transmission. It is finished in blue with black interior and navy roof. At last report, it was being offered for sale by David-Gerald TVR Sportscars in Inkberrow, Worcestershire, England.