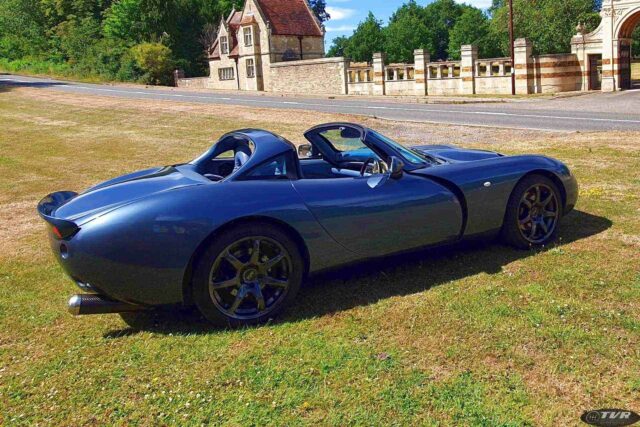 Blue is my favourite color but I would never thought it would suit in this way on the Tuscan S MK1. I find it the wildest model of the Peter Wheeler era because of its mechanics with not a sophisticated layout as the Sagaris is (more modern and GT oriented). The Tuscan S is a devil. But with this livery you see in the images it acquires an extraordinary personality full of elegance and charm.

I had the chance to meet a British TVR addict. He’s the owner of this jewel you can see in the story. Here’s his the experience. 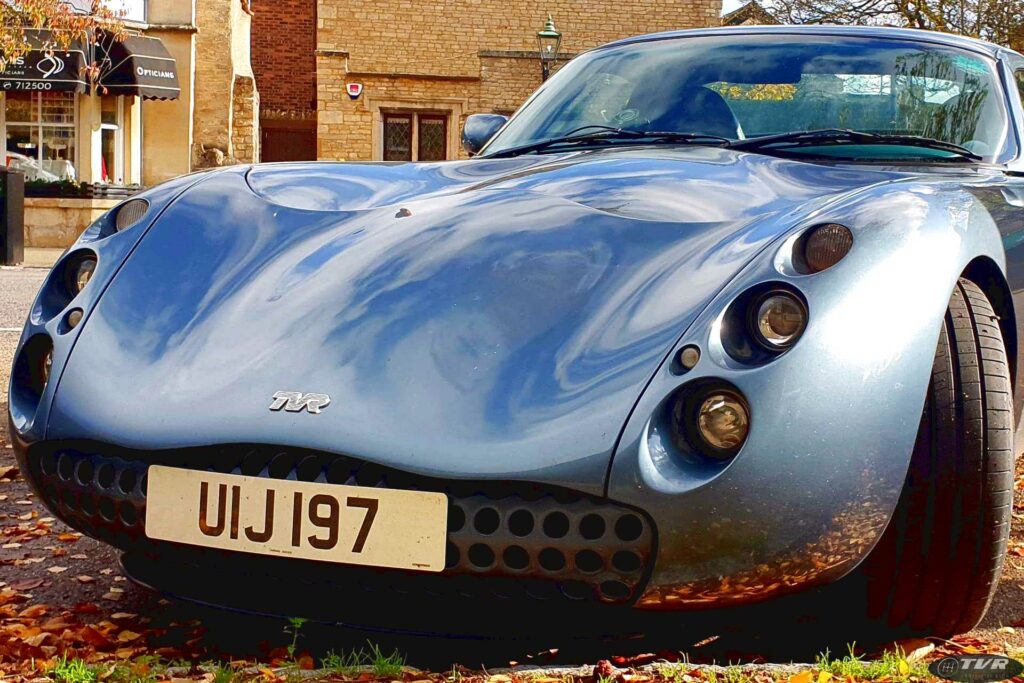 Where does your passion for the TVR brand come from?
I like the brand for its enthusiast-based origins.  It is like Lotus, but with increased levels of comfort and luxury. Although they are track ready, like a Lotus, you can also use some of the later cars as grand tourers due to their comfortable seats, aircon, power steering etc. I also like that the later TVRs are modern classics, as you have the sweet spot of an analogue driving experience, but with more modern technology for the underpinnings. 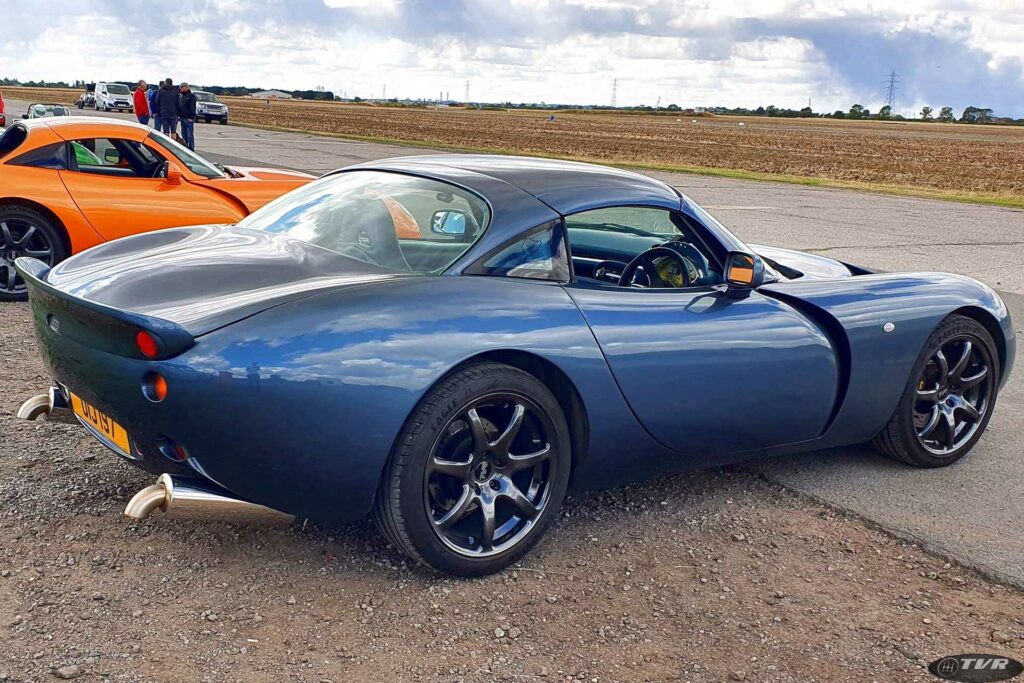 I had a DeLorean DMC-12 (engineered by Lotus, so they also handled very well) for nearly nineteen years and that was even more analogue than the TVR Tuscan S, as the DeLorean didn’t even have power steering (although with the engine in the rear, it didn’t negatively impact the driving experience).  The DeLorean I bought with just 6500 miles on the clock in January 2002 and by the time I sold it in December 2020 it had nearly 90,000 miles on the clock. In the last four years I had it professionally upgraded from the 170 BHP odd firing 2.85 litre V6 PRV (Peugeot, Renault, Volvo) engine to a 526 BHP 6.2 litre LS3 (a Texas Speed Stage 1 cam shaft was why it went from 480 BHP to 526 BHP) and a Porsche 911 (964) Turbo transaxle to cope with the torque. The car still weighed around 1266 KG post conversion. Ultimately, the urge to change to another car became strong enough (as I was missing out on other cars) that when someone offered me a price I couldn’t refuse, I leapt at the chance to then scratch my itch to own a TVR Tuscan S MK1.

If you owned other TVRs, is this Tuscan S the best for you? Or, are there other TVRs that you dream of?
I’ve driven a TVR Chimaera 5.0 (Buick V8) which sounded amazing, but it isn’t a lively as the Tuscan S. The TVR Cerbera 4.5 AJP V8 is a favourite too, but I wouldn’t want to own one.  The TVR Sagaris I’ve heard is too soft, compared to the Tuscan S, although I did have a set of the TVR Sagaris steering arms fitted to my Tuscan S, which eradicated the little bump steer that my car had. I love the Targa roof and styling of the Tuscan S and I’m very lucky that the colour scheme and specification is as if I’d ordered it that way. As such, I doubt I’d ever choose another TVR over the car I have. 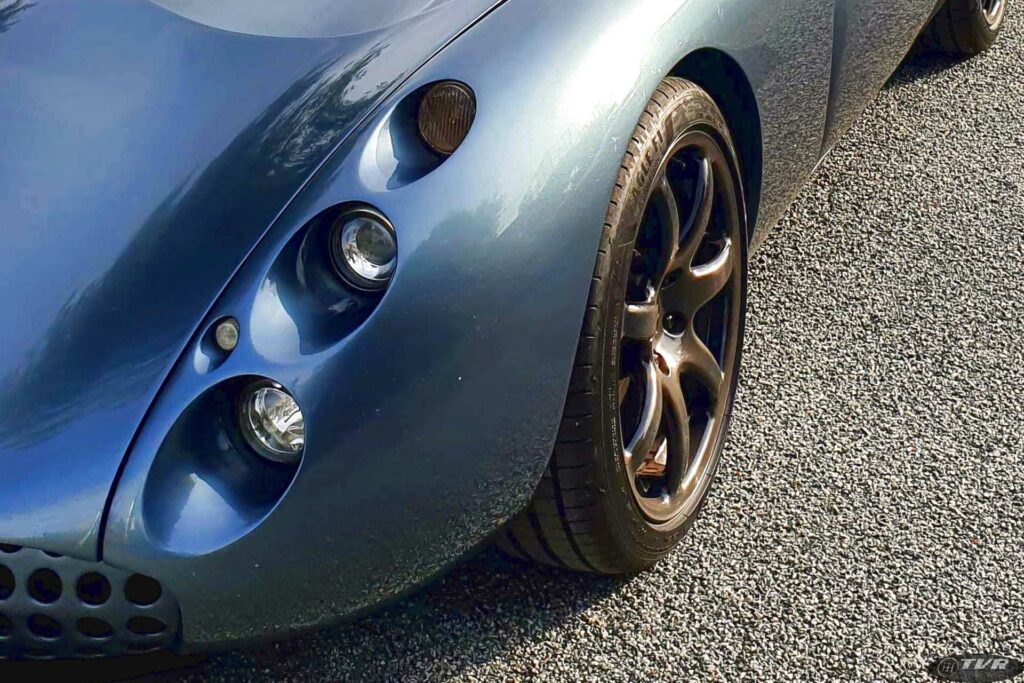 Which are the best qualities of the TVR Tuscan S MK1? Torque, trim, chassis, handling?
What has surprised me the most is how track focused the MK1 TVR Tuscan S is. It is definitely at home on the track being ‘spanked’ as many TVR owners call this. The Tuscan S seats are very, very comfortable and the heater and aircon work very well.  The lack of plastic and instead machined aluminium parts for the indicator stalks and window controls for example really do exude a high-end feel. The only car more bonkers that this is the Pagani range which are way more modern and in a totally different hyper car price bracket. 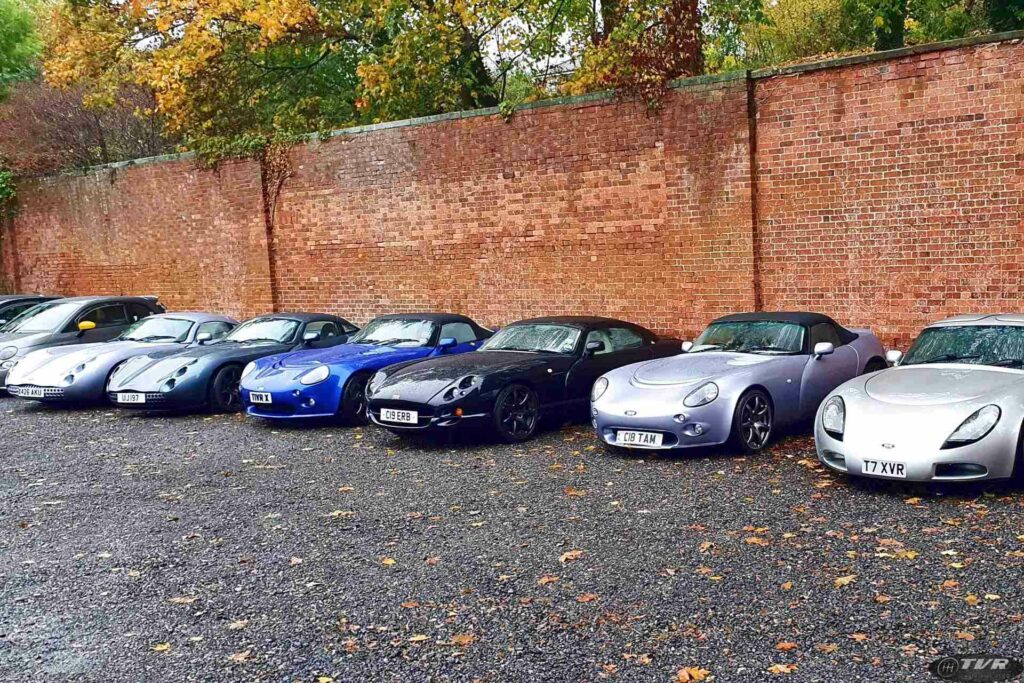 What’s her worst feature?
The positive attributes which make it so visceral, can also be more wearing if you’re not in the mood. What I’ve mean is the noise, vibration, and harshness (NVH). A light car such as this (1050KG) doesn’t’ soak up the bumps as much as a heavier car.  It doesn’t at all crash over bad road surfaces, but you are definitely moved around more in your seat than something more modern. It is fitted with rebuilt Nitron adjustable shocks which were set to medium stiffness when the car had had a full geo. 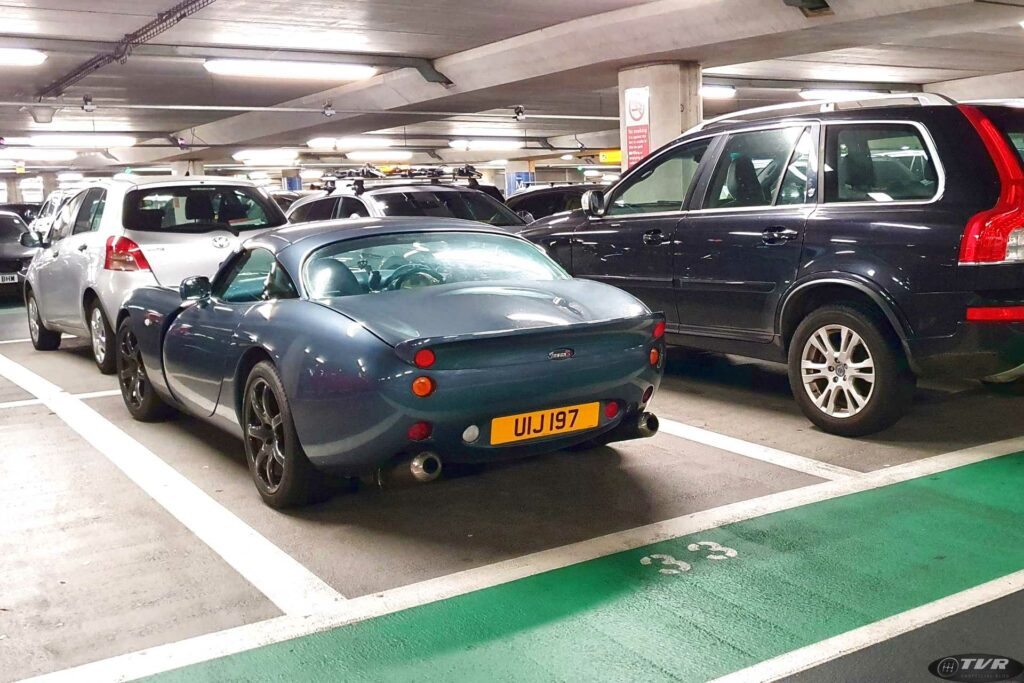 I made a note of the settings before changing them to the softest settings and it is much nicer on bad roads. The front is super tight (brilliant steering response), but the rear isn’t quite as focussed so you need to drive within its limits (and yours) which makes driving it even more fun as you are doing all of the work.  Although you have power assisted brakes and steering i.e. all of the input controls are light and lovely to feel, there is no ABS, traction control or any computers to do any work. You are 100% for what is going on. This could be seen as a negative if you’re tired and not paying attention on a wet road. The good news is that the car is excellent at communicating to you as to what is going on, so it is down the skill of the driver to interpret/listen and act accordingly. 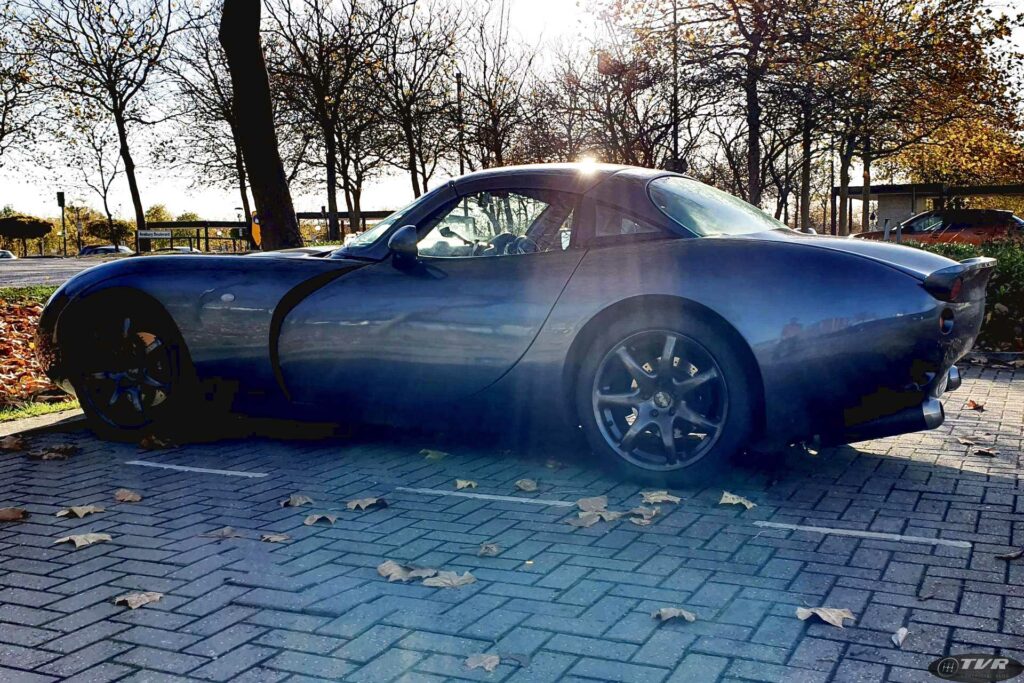 The bean counters at TVR reduced the oil galleries buy one to save money on the original Speed Six design. As such, the worst thing you can do is let the engine idle at cold (at tick over RPM) as the oil can’t circulate throughout the engine. If it must sit on idle, then hold the RPM at 1500 RPM for ten seconds to help circulate the oil. The most important steps are to drive straight away and keep the revs no higher that 2500 RPM until the engine has reached 40 degrees. 3000 RPM max from 50 degrees, 4000 RPM max up 60 degrees and 5000 RPM max until 70 degrees. 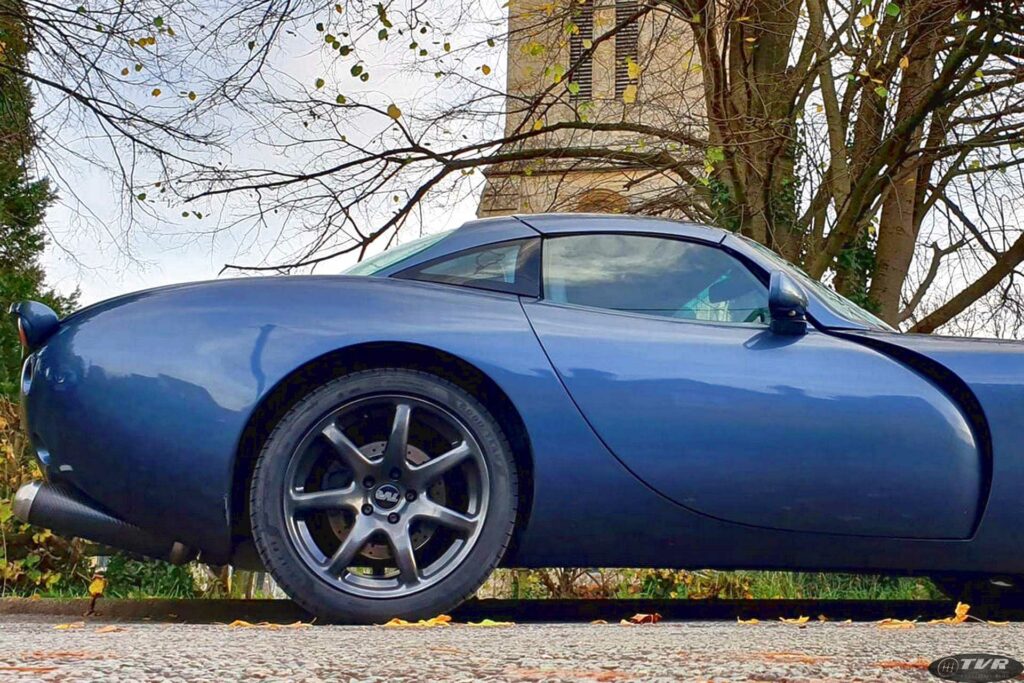 Once you hit 70 degrees you have an available 7200 RPM to play with (for a 4 litre S spec) to fully spank the engine, with shift LED lights default set to amber 6500 RPM and 7000 RPM for the red LED shift light. Overall, it takes from cold around ten minutes of driving to get to spankable status (depending on environmental temperature) and this can be halved by using a preheater on the oil tank. This is essentially an 500W electric blanket that if turned on via the mains around 1.5 hours ahead of use, you then wash the insides with preheated oil when starting. 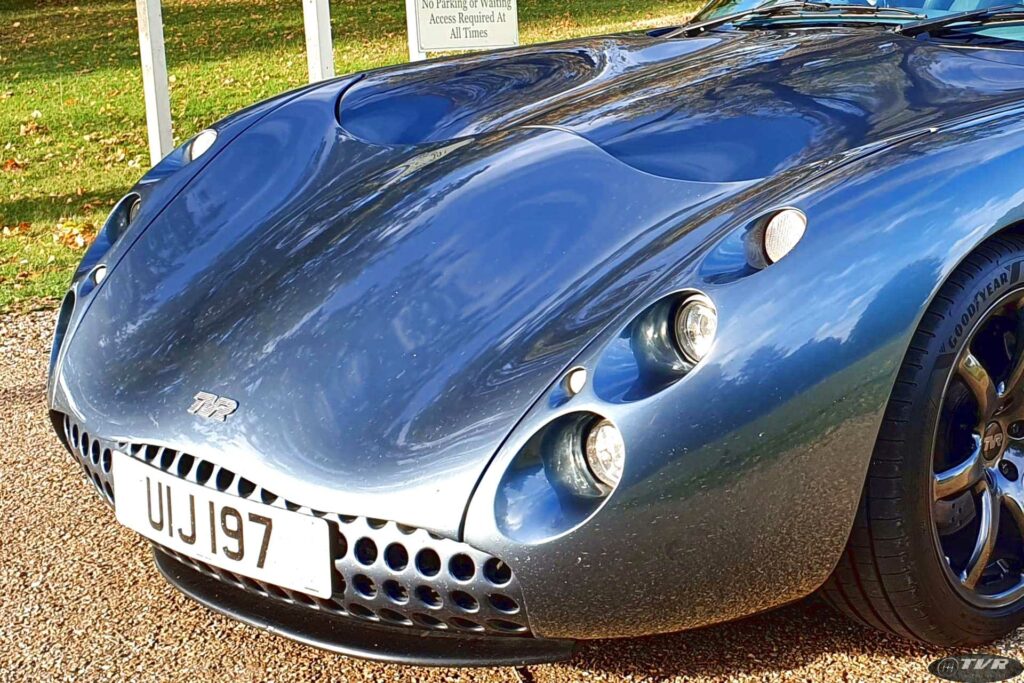 The oil temperature will quickly drop from around 120 degrees to around 34 degrees as the oil in the engine and cold internals bring it down, but you’re speeding up the overall warming through process. One owner has owned his TVR T350t since new and has racked up over 296,000 miles on his 3.6 litre Speed Six through never spanking it until properly warmed up. Proof, that if the internals are of good quality, they will last. TVR didn’t always buy the best possible internals so the pre 2004 cars often needed engine rebuilds. Mine was rebuilt by Sr8tsix at 9,000 in 2007 and has over 52,000 miles on that build. It doesn’t leak and it doesn’t need topping up. 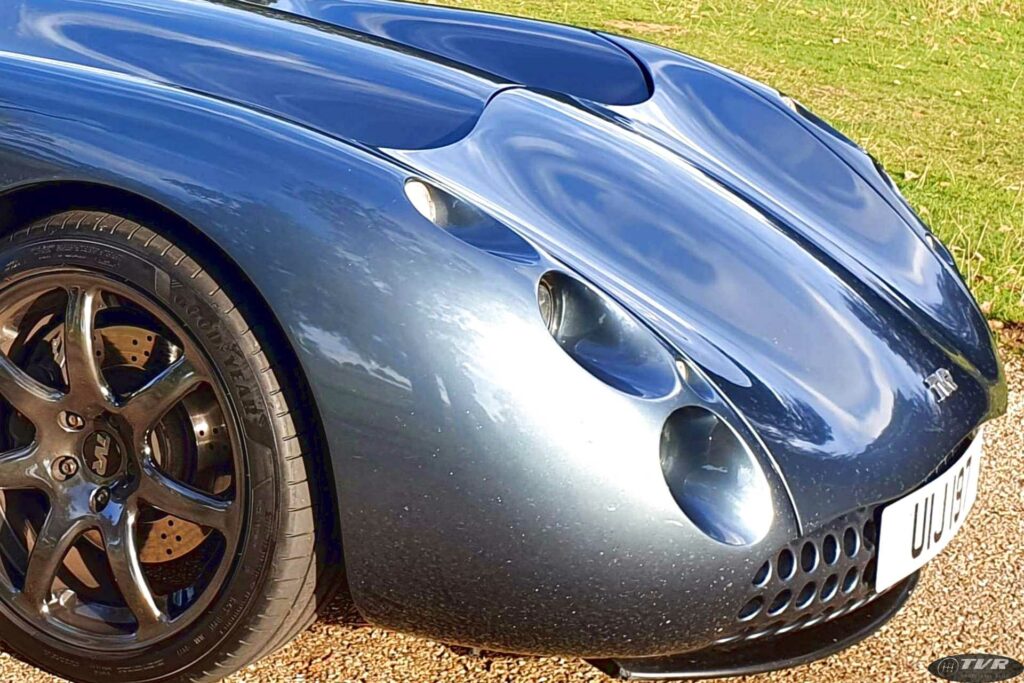 What’s the maximum speed you’ve reached in her so far?
The previous owner nicknamed it Jezza (in reference to Jeremy Clarkson) due to it being loud and obnoxious. As such I’ve never thought of ‘him’ as a ‘her’.  I’ve not had enough track to exceed 140 MPH so far, but the previous owner had more than 185 MPH out of him on a runway. 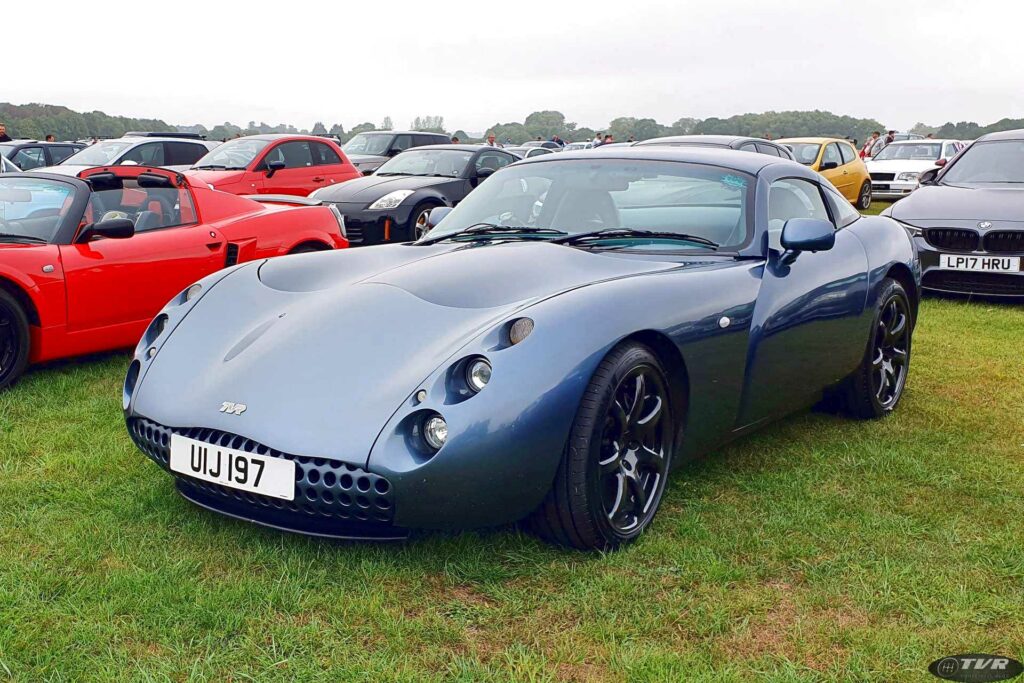 What’s the most exciting trip you had with it? A hard climb on a Swiss pass, a gentle trip on Cote D’Azure?
I bought my car in June 2021, so partially due to lockdown, I’ve not driven it outside of the UK yet. The previous owner took it to the Nürburgring and this is something I’d like to repeat myself, but this time it’ll be wearing its track silencers, as last time it was banned after a drive by of 135db (limit was 130db). So far, I’ve covered over 6000 miles in the UK with it. 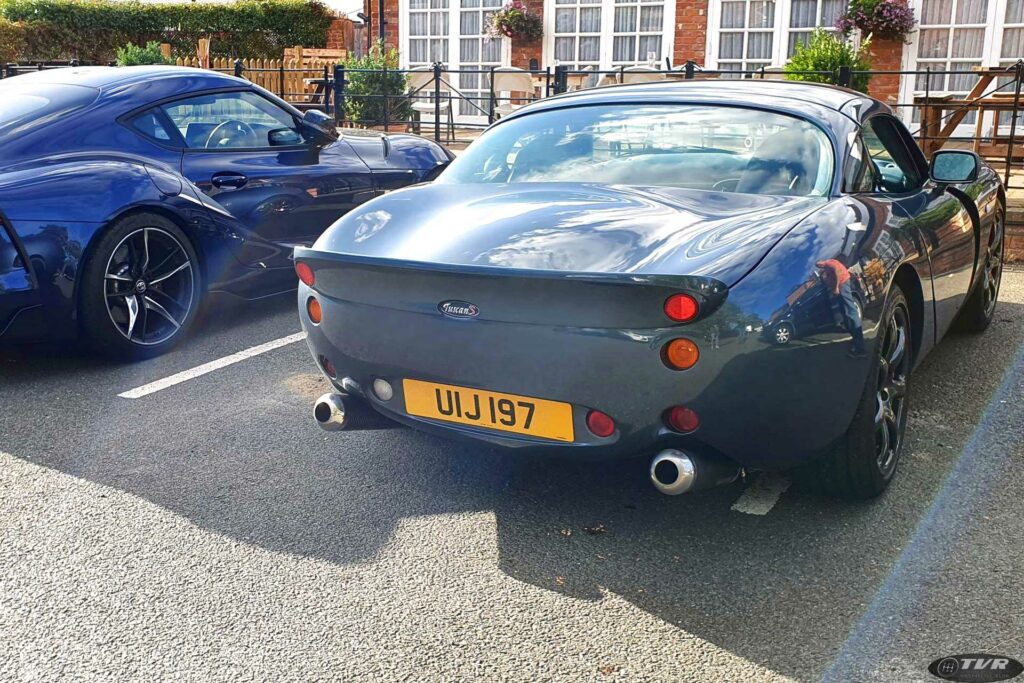 How is the maintenance? Expensive, hard, easy, is it reliable?
I bought the car knowing that it would need a clutch. In the first year I’ve given it everything it needed to make it mechanically tip top. This included having the throttle bodies rebuilt (and a new throttle pot) to improve smooth running at gentle, low throttle. It has had four new tyres, a pre-heater for the oil tank and more recently I’ve just bought some new indicators that incorporate a day light running light. The twenty-year-old BMW starter motor started to slowly fail, so this is the only part I changed myself that was needed to making cranking it more reliable. 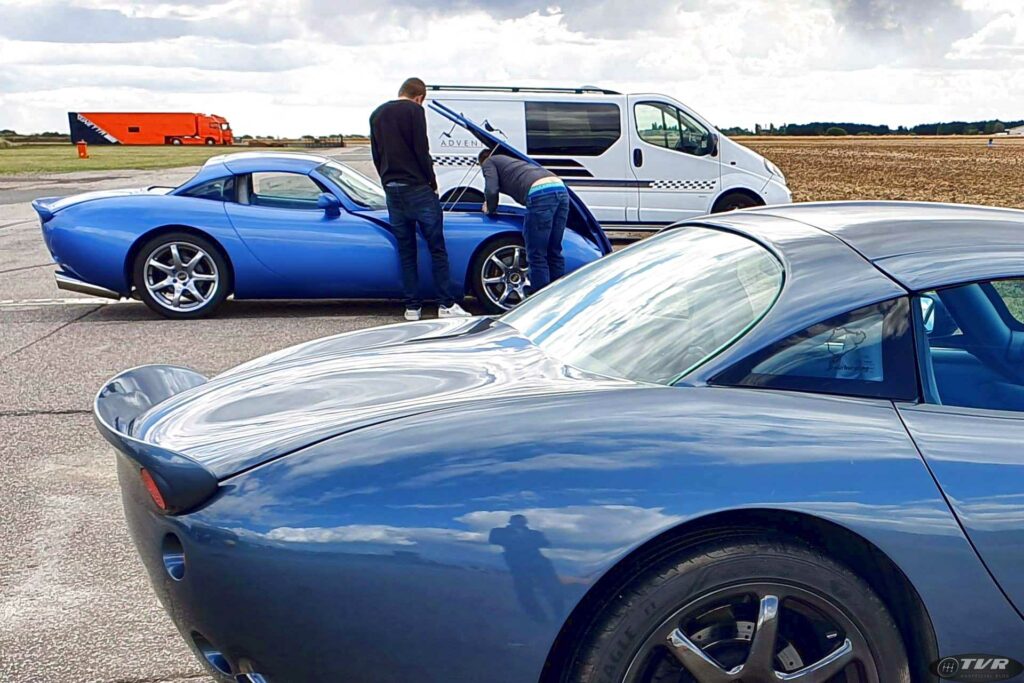 Manuals and documentation are very hard to find, but the offset is that here in the UK, there are several dedicated TVR specialists.  After having a project car previously that I did a lot of work on myself, I now enjoy taking my car to a specialist, so that I can work in their office upstairs, whilst they work on the TVR downstairs. Year one was more expensive than year two as now the car has what it needs mechanically. For year two, I’ve not been spending anything on it, bar fuel and tyres.  It has not broken down, where I needed to have recovery and I feel confident in it so much, that I would happily drive it to Europe tomorrow”.

(Many thanks to Chris Hawes for his kindness)