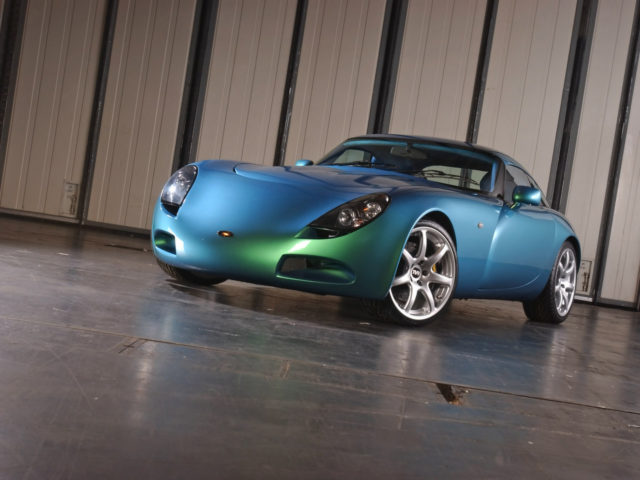 The T350 was a brand new coupe based on the running gear of the universally acclaimed Tamora. The concept is to apply TVR’s expertise gained in motorsport to a road car, and both shape and engineering owe much to TVR’s racing programme. It is intended to form the basis of a racing car for the new GT Cup class of the British GT Championship as well as for a number of overseas one-make race series. This car is available in two forms – the T350C, where C stands for coupe, and the T350T, for targa, which is the version with two removable panels overhead.

Function dominates form with the T350 and its motorsport application determines the way the car looks. As a result, every effort has been made to maximise downforce while minimising drag. The frontal area is very smooth without a central radiator intake which helps it punch through the air easily while the sharply cut off tail punctuates the airflow sharply to reduce drag. The sloping roofline at the back has been very precisely profiled to ensure that the airflow remains attached to the car in order to negate lift. Allied to a diffuser under the exhausts and a splitter at the front, the T350’s shape has been optimised aerodynamically in a way that is simply impossible with a two-seater convertible.

The interior of the T350 is largely based on that of the Tamora and is all the better for that. It has the same analogue readout for speed and engine revs above a switchable multi-function display which gives the driver the fullest range of information from engine water and oil temperature, outside air temperature and battery volts to maximum and minimum values achieved (including maximum speed). A sports pack is available which will have extra readouts including lap times. With a side-opening hatchback above the large luggage area, an unexpected advantage will also come in terms of plenty of boot space with easy loading.

The T350 enjoys the performance its looks promise. It is propelled by the same 350 bhp version of TVR’s Speed Six engine that has seen the Tamora decimate the competition in test after test by the motoring press. In the case of the T350, acceleration, top speed and handling have been helped by its aerodynamically superb shape as well as its lower weight and center of gravity. Now in production for five years, the Speed Six is a tried and tested unit and has performed admirably in the hothouse environment of GT endurance racing including the Spa 24 hour race in 2002. In all variants, TVR’s own engine has been designed with responsiveness in mind which is the reason for it having individual throttle butterflies per cylinder and an ignition and fuelling map specifically written to make revs rise and fall instantaneously.