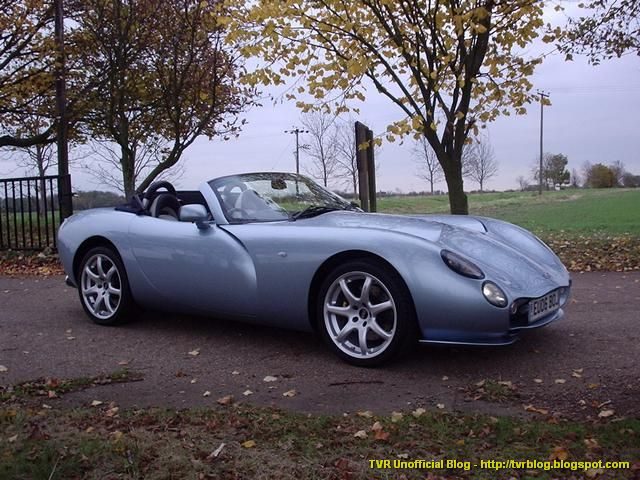 My TVR-“career” started off in 1988. A customer of mine wanted me to find him a god insurancecover for his English sportscar. A TVR 450 SEAC. He showed me the car and wanted me to drive it on my own. What speed and what a sound! I was stuck, and I have been ever since.

Driving TVR is in Sweden is a bit different. I live in Stockholm, and driving a sportscar is only possible from late April until mid-October. The rest of the year the roads are snowcovered.

My friend Arne from northern Sweden and I, have gone to the Classsic car Show every November for the past 6 years. 3 years ago I had just sold my lovely Chimaera 500 (I still regret it – it was a lovely car), so I was well prepared to look for a newer car I the UK, when travelling from London to Birmingham and the car show. We visited many TVR-dealers: David Gerald, Peter Smith Sports cars,TVR Power and finally Offord Motors, and there it was. I had seen the Tuscan at Pistonheads: one of the 5 last made cars, and only 4000 miles on the meter. It costed far too much, but what the heck. I went the back the next weekend and made a downpayment and again thee third weekend mi-December anf´d drove it home with my wife. All the way from Offord under the English channel, through Holland,Germany, Denmark and Sweden; totally 2750 km and every kilometer in the pouring rain.

It has been a totally problemfree car. I have a very good mechanic in Stockholm, who discovered haw to turn the headlights to fit on righthand – driving roads. He just tuned them upside down. As simple as that.
Driving a RHD car on the right side is a bit tricky, especially when overtaking, but you get used to it.

I This is my third season with the car, and it has never let me down, I drive it appx 2500 km every year, usually to TVR-meetings. This summer we met 22 TVR:s on the island of Gotland in the middle of the Baltic Sea. It´s fun meeting these guys – every one is interested in each others cars.

The carshow in Birmingham has almost every English car-club represented – TVR has won many of these events- This year TVR Power will have an upgrade Sagaris with a speed six engine, from 4 to 4,5 litre. 460 Bhp!!! The only thing stopping me is the cost, £10 000.

We have appx 150 cars in Sweden, and around 40 of them I meet a few times every year. I have only been to the racetrack with mu Tuscan once. I found the suspension a bit too softand I will change the whole package when visiting TVR Power in November.
This was a short story of my TVR.ing from 1988 up to now. It is a shame they don´t make the cars anymore……