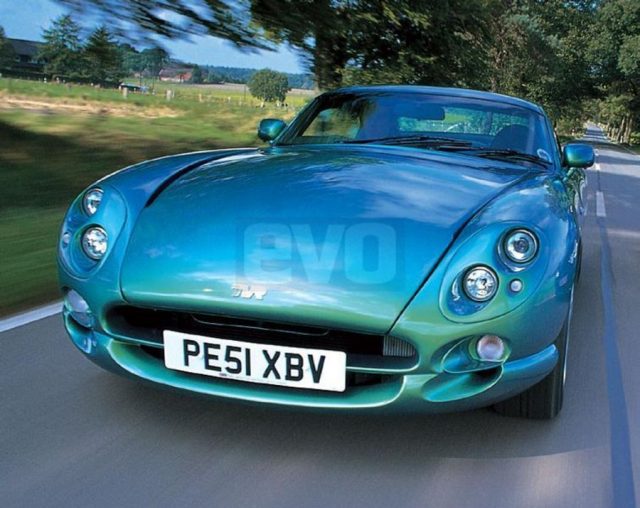 [February 2002] We’re heading west, charging home at a steady 100mph, chasing a pink sunset that is gradually turning crimson and, in a long hour or so, will fade to dark blue. The tacho needle of the Cerbera is pegged at 4000rpm and the cockpit throbs to the rather coarse beat of its undeniably effective V8. Its constant drone is subsumed, however, a distant back-beat to the soothing, lilting tunes of the chill-out CD that’s playing at generous volume. And, boy, do we need to chill.

Exactly 24 hours ago, staff photographer Andy Morgan and I were cruising at 100mph in the opposite direction, hastening the sunset as we speared through France, Belgium and Holland to our destination in northern Germany. Now, on the return leg, I’m in energy-preservation mode. Anticipation has become an obsession, for almost an hour I haven’t changed gear or touched the brake pedal, Morgan and I speaking only when the CD needs changing. We’re both a bit shell-shocked. Ahead of us lies another four hours of driving, punctuated by an interesting moment on the Channel Tunnel train. Behind us lies a weird day and a bemused bunch of Brabus engineers and mechanics.

It was an odd idea, whichever way you cut it. Our journey was prompted by the subtly aggressive Mercedes Sports Coupe you see here, latest product of the Bottrop-based Brabus company. Don’t underestimate it. We didn’t drive the TVR across half of northern Europe to see it kick the Sports Coupe’s stubby rump. What we wanted was a pure sports benchmark against which to judge the 188mph hatchback…

Yes, you read that correctly… 188mph. Brabus has endowed the humble Coupe with genuine supercar performance by the not-so-simple expedient of fitting a supercar-sized motor. It’s hard to believe, but the engine packed under the Sports Coupe’s bonnet has almost the same capacity as the motor in the back of the new Lamborghini Murcielago – a V8 of no less than 6.1 litres, churning out 420bhp.

Ludicrous? Certainly. Unworkable? Maybe. No contest for the TVR? Don’t be so sure.

The TVR Cerbera 4.5 Red Rose and Brabus are utterly different cars. They share a common performance goal but tackle it from diametrically opposed directions. The TVR is a bespoke sports car from nose to tail, the Brabus a mass-made production car that’s been seriously modified. The differences between the two companies, their approach and execution, are as strong as the contrast between their products.

The iridescent green/blue TVR Cerbera looked utterly gorgeous when it first arrived on my driveway. Long, lean and as swoopingly curvaceous as ever, I reckon it’s made even better looking by the new multiple-lens headlamp arrangement. Later that day we were gob-smacked by the effectiveness of its gas discharge main-beam lamps which take a moment to warm-up but are then astounding for their uniform spread and outstanding penetration.

Looks are entirely personal, of course. We chose the TVR Cerbera 4.5 for this job because, although it’s been somewhat overlooked since the introduction of the Tuscan and Tamora, it remains TVR’s most powerful car. And this one is especially potent because it’s the first fitted with TVR’s Red Rose after-market performance kit, which gives its home-grown AJP V8 an extra 20bhp for a generous total of 440bhp. That’s so long as you fill her with super unleaded and press the snazzy aluminium ’95/97′ dashboard button so that its surround glows red instead of green, indicating that the high-octane fuelling map is engaged.

There weren’t many opportunities to sample its full potential on our journey to Bottrop, but other developments made our Cerbera a more agreeable high speed companion than I had expected. The sexy 18in alloys from the Tuscan come with front suspension geometry changes that enhance straight-line stability and make the steering less sensitive to small inputs, while the high-speed ride is more supple. Wind noise remains a mild irritant, with a constant rustle over the driver’s door mirror at anything over 75mph, though it doesn’t get any worse the faster you go. The seats, however, prove supportive and comfortable. Bring on the miles.

Only when we’re deep into Holland does the TVR Cerbera blot its copybook. We refuel, I push the start button and nothing happens. The starter motor, we surmise, isn’t playing ball. We could call AA International Rescue but figure that they’d come to the same conclusion as us somewhere closer to midnight, so we bump-start the Cerbera and make for the hotel in Bottrop, banking on it being a simple problem for the Brabus engineers to solve in the morning.

In the massive car park of the impressively slick-looking Brabus factory, the TVR Cerbera stands out like the proverbial sore thumb, its look-at-me paintwork and sleek form a shocking contrast against the sea of black, silver and white Mercs awaiting conversion.

A swarm of blue-dungareed Brabus mechanics descend on the Cerbera and are soon probing its electrics. It’s obvious that they find the TVR a little, how shall we put this?, quaint. They’ve probed from beneath, realised the starter is between the V8’s banks, and are now going in from above. One of them peers at the Cerbera’s induction system and smiles. ‘I’ve never seen a car made of Sellotape before,’ he says.

I feel a patriotic pang of indignation. In the UK we regard TVR as one of the last bastions of the independent British sports car, and the only such company that produces traditional yet wonderfully individual sports cars in significant numbers. All true. And Brabus? Just another German tuner modifying existing cars with bodykits, big wheels and huge engines to deliver monumental performance? Not strictly true. Brabus might not build everything from scratch but it doesn’t sell parts, only complete cars that have been developed and TUV- homologated as such. This year it’s on course to build 7000 cars. TVR will make around 1500.

TVR claims a top speed for the TVR Cerbera 4.5 (without Red Rose pack) of ‘190mph-plus’. Having felt it surging through 160mph with real determination on the autobahn, I reckon that claim is valid. That’s my opinion. The top speed of the Brabus CV8 Sports Coupe is 188mph. There’s no reckoning about it; it’s been independently measured by a German magazine.

The CV8 is ready to go and, a little sooner than expected, so is the TVR. While a scrum of Brabus mechanics is making its way through the electrics from starter motor to ignition switch, Harry (who’s flown out to help with the story) has been on the mobile to the factory back in Blackpool. We check the fuses in the boot and find the one for the starter motor has blown. It’s replaced and the TVR Cerbera fires up, causing at least one Brabus mechanic to blush.

Both the TVR Cerbera and the Brabus have V8s but they sound as different as the cars look. The TVR Cerbera’s is a race-car-style V8 with a light flywheel, just two valves per cylinder and a flat-plane crank that matches the power strokes of the cylinders of either bank. It sounds like the in-line four of a big Japanese bike. The CV8 has a bored and stroked version of Mercedes’ 5-litre V8 and, although it’s been stretched to the very limit its block and cylinder head will allow, it sounds woofly and velvety-soft in comparison.

In fact, tucked behind the TVR Cerbera through town, en route to more interesting roads, the whispery note of the 6.1-litre V8 is drowned out by the TVR’s 4.5. You could almost believe you were driving a standard Sports Coupe. Brabus has refrained from altering the interior of this car, so beyond a fatter, more sculpted steering wheel rim and a 360kph (224mph) speedo, there’s little to tell you this car is special.

Clear town, find an empty road, nail the throttle and… Oh. My. Gawd. Initially the CV8 can’t use what it’s got. It lunges menacingly and then hits the leash that is ESP traction control. The yellow warning triangle in the instrument pack blinks rapidly, the hardened note of the V8 momentarily softens, speed and traction build (tum-te-tum), then the full force of all 6.1 litres floods in. It’s crazy, crazy power; you’re slammed into the seat so hard you fear for its springs or your ribs. It also crosses your mind that if you hit a slippery patch which, contrary to its name, the ESP hasn’t foreseen, you’ll go wildly sideways. That’s the first time you boot it. By the end of the day it’s just as gob-smacking.

Such humongous grunt is terrifyingly addictive, especially when you’re driving a sit-up-and-beg hatchback behind a ferociously fast, low-slung sports car. Sure, the CV8 isn’t your average spindly-wheeled, poverty-spec Merc but even though it’s on 19in rims all round (shod with 235/35 section rubber up front and 265/30 behind), they’re tucked inside the standard arches, so it’s a Q-car in the very best tradition.

Look hard. Beyond the rims there are deeper aprons front and rear, twin tailpipes and a flat Brabus ‘B’ badge instead of a large grille-mounted Merc star. Look harder and you might notice the bonnet vents and the gigantic six-pot Alcon brake callipers behind the front split rims.

It’ll go around corners, too. In fact, the CV8’s suspension set-up is pretty impressive; not quite as supple as the TVR Cerbera’s but more than acceptable considering that it has to behave just as well whether it’s one-up or loaded with four people and luggage. The Brabus can’t match the TVR’s steering response or precision, and even though it’s got plenty of grip, it’s not the sort of car that needs to go around corners quickly; down the straights it will batter anything this side of a Ferrari 360. It really is that fast.

We managed one very un-scientific test of outright acceleration on the autobahn, when both cars were bottled-up behind a dozy Omega that took an age to pull to the inside lane. When it did, Harry floored the Cerbera and I gunned the CV8. From 70 to 100mph there was nothing in it. Thereafter the TVR very slowly edged away until by 150mph it had pulled out two or three car lengths. Marginal, to say the least.

Intrigued, we weighed the TVR Cerbera back at Brabus HQ and found it was somewhat heavier than the 1100kg quoted; 1275kg, with a full tank, to be precise. Mind you, that’s still pretty light when you consider that a Golf 1.8T GTI weighs 1236kg. And anyhow, as we said at the outset, the Cerbera was along principally to give some perspective to the CV8’s performance.

It also offers a view on the CV8’s value for money. The specification of the donor car that Brabus converts is up to the buyer, though the minimum spec results in a Sports Coupe CV8 costing about £66,000. All-in, including the Red Rose conversion, fancy paint, Tuscan alloys, air- con, gas discharge lamps and full leather interior, the TVR Cerbera costs £53,900, £7300 more than standard. They are such different cars, it’s up to you which you consider better value.

However, the Brabus does come with a three-year, unlimited mileage warranty, which sounded very tempting when, still hours from home, we came to bump-start the fuse-blowing TVR on the Euro Tunnel shuttle.