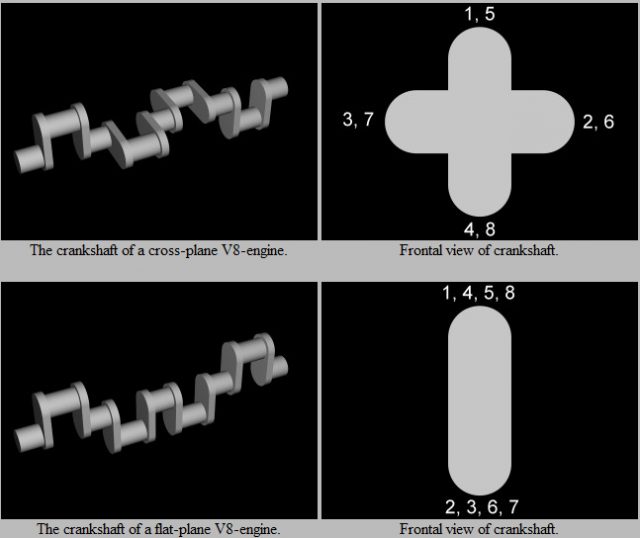 If you hear about a V8 engine you could imagine that a Maserati Granturismo, an Audi R8, a Porsche Cayenne/Panamera, a Ferrari F430 or a BMW X5/X6 AND a TVR Cerbera have the same engine: 8 cylinder. Well: not for love nor for money! Sympathizers of TVR cars (real TVR fans know it!) must know how special and particoular a TVR V8 AJP is. Here is a very interesting technical lesson

This design does not balance the engine correctly, and when the motor is working it creates a large amount of vibration, which can be dangerous for both engine and the rest of the car. Cross-plane engines displace this vibration through a series of counterweights that balance out the piston action and make the engine run smoothly. This counterweight system is very effective and helps to reduce nearly all vibration in American engines.

A flat-plane engine is used in sports cars, especially European sports cars such as Ferraris and Lotuses. A flat-plane V8 forgoes the system of counterweights that adds weight to the engine and slows down the overall performance of the car, making it slightly slower and less responsive. Instead, it uses a crankshaft that works as a straight line, a single plane of eight pistons working together. Because of this flat-plane construction, the pistons are balanced and the engine vibrates less than in a cross-plane. Without the counterweight system, the vibration is still higher than in American cars, but people usually appreciate this extra rumble, which is normally offset by the specially made sports car pistons.
Layout and Additions to the Flat-Plane Engine
# As the picture shows, the flat-plane V8 is set out like two inline-4 engine designs right next to each other. When the engine runs, the pistons shoot up and down, the first and last pistons of the bank occupying matching positions on either end of the array, so that the force on both ends is equal and the system is balanced.

Since there is less mass to the entire system, it has less inertia and so can make the necessary changes faster based on the driver’s commands. The engine can turn faster, and you can accelerate faster. For this reason, flat plane engines are often used in racing cars, vehicles meant to go fast and change speed quickly. If the vibrations of the flat-plane engine become too strong, then engineers put in balance shafts designed specifically to tone down the vibration with special construction and weight.

Because of the flat plane’s simpler engine design, it can also have a positive affect on exhaust output, the exhaust being streamlined for more efficient transference out of the engine.