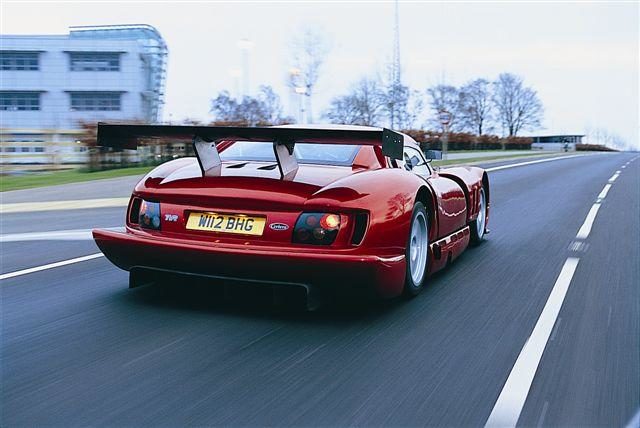 Registered W112 BHG, this car was fitted with what are called the “mild” cams and conservative ECU mapping which reduced the power to a mere 880 bhp. It was tested by EVO Magazine in 2005, “even the seating position was crazy”, the test driver said somewhat nervously, “It’s like getting into a normal car and sitting on the floor – in the back.”
There is a procedure to starting this monster however. An immersion heater warms the engine oil from the mains. Twenty minutes later, press the black button to start the ignition and fuel pumps and again to turn the engine over. Tickle the throttle and BAM. A V12 fed with scaffolding off-cuts and rocket fuel. The four side-exit exhausts banging in turn. Low down torque is flexible though with enough to move off with just the lightest of touch on the throttle. To the un-initiated, forward motion will largely be sideways but the EVO test driver was clearly made of sterner stuff. With the engine on-cam, Northamptonshire was treated to TVR Heaven with Spitfire sound effects. But this is also registered for the road.

The local MoT station, used to most things, had real problems when this bowled up. Mike Tyson is not a nice man. Would I let him look after my children? Would I take this on the road? Trees fizzing past at frightening velocity when you’re sucking up 2 miles per gallon. And they are remarkably unyielding. I know, I’m a bad skier. W112 BHG has been meticulously restored by the Factory and then specific parts by a dedicated TVR enthusiast.

Money has not been an object as; only recently, some £35,000 has been spent on a slightly modified rear end made purely in titanium. The engine has a bespoke “bucket head” design and been hand built from top to bottom. The whole car is now perfect and ready to go. It has also seen a healthy schedule of publicity, appearing in many UK magazines, prominent motor shows and not only Gran Turismo 4 the game but also as the pivotal car for the Sony launch. It is a one off, horribly dangerous and ugly/beautiful as hell. Torque of the Devil.