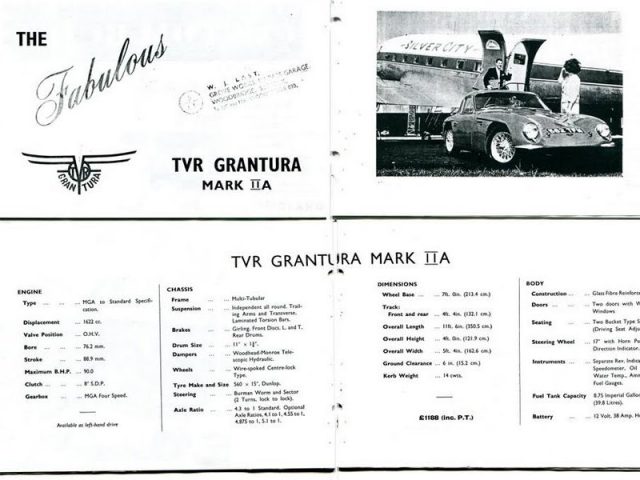 £795 was the price to pay for a Grantura with Ford engine, £93 more you handed over for the MG A engine version and if you wanted the Coventry Climax version you the uplift was roughly 30% compared to the Ford version. That probably explains why so few Climax cars were shipped and why most of them received an MG engine during their life. It’s also notable that only the MG version was homologated for racing.

But even if you paid the £1045 for the Climax car, that wasn’t the end. A full stage 3 race tune would add another £105 to the bill, but even the more moderate stage 2 engine conversion was £63. In comparison to this any other option you could order, like a heater/demister unit fresh air type (£15), windows screen washers (£2), leather upholstery (£10-12) or adjustable Koni shock absobers (£10) were quite affordable in comparison.

Many people say the Germans have invented the car you can configure, but the TVR guys already had assembled quite a list of stuff to increase the price of your car. Interesting the fact that you could order a lightweight chassis/body combination, only the lightweight chassis or the lightweight body individually. But similar as today it was more expensive to get less. Adding all the bits you may have wanted together you easily could have ended up with a £1200 or 1300 Grantura, a car probably 5-8 times as expensive as a Volkswagen beetle.