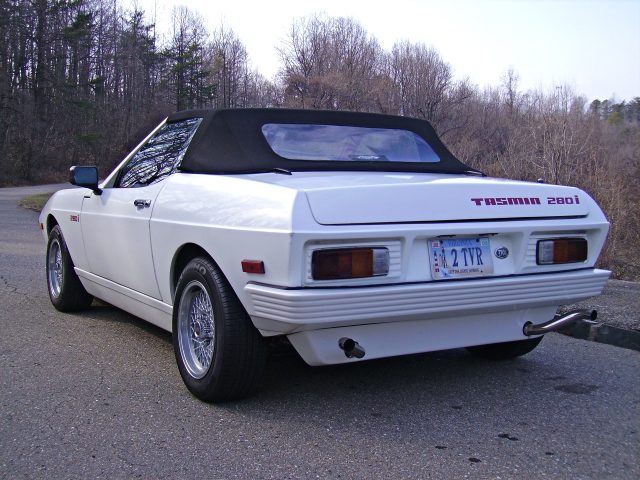 TVR stunned the motoring world in 1980 when it brought out it’s newest model, one we more commonly refer to as “the wedge”. Known then as the Tasmin, it was a total departure from the previous TVR M-series models which had more rounded contours. This new TVR Tasmin appeared first in a coupe version and later that year, a convertible followed with a very ingenious three-position top that was very easy to operate.
As was the case with previous TVRs, the new angular fiberglass body was mounted to a sturdy tubular steel chassis that was longer than the previous M-series. The running gear was obtained from Ford of Germany, the Cologne Ford 2.8 litre V6 which was fitted with Bosch’s K-Jetronic fuel injection producing in the range of 160 bhp in the home market. The power was transmitted to a Jaguar based rear differential unit with inboard mounted disc brakes.

The Tasmin appeared to be a move upmarket for TVR compared with the previous models. The interior of these cars featured a walnut veneered dashboard, a full range of instruments, and power windows with optional air conditioning. The seating surfaces were leather with cloth inserts with half-hide and full hide as options through the production of the series.

This new wedge-shaped body was the result of TVR’s collaboration with freelance engineer-stylist Oliver Winterbottom. Winterbottom had Lotus’ styling manager when the Elite and Eclat models were designed in the seventies.
The TVR Tasmin won accolades on the show circuit in Britain and Europe following its introduction, however, in the United States, where customers were accustomed to the more rounded contours traditional to TVR, the new shape came as a bit of a shock to their visual senses. That, combined with the fact that the Tasmin did not become available until the 1983 model year and at a price some 6-10.000 USD higher than the last 3000S, TVR found sales in the US to be slow, at best.

TVR also suffered from the introduction of the new model because it was more expensive to produce than the previous M-series models. Also, around the end of 1981, TVR owner Martin Lilley, feeling the financial pinch, turned ownership over to Peter Wheeler who, himself, was an enthusiastic Tasmin owner at that time. Under Wheeler’s leadership, the wedge line would grow both in offerings and in power until the last wedge was produced in 1992.

TVR Tasmin 200, Tasmin +2 Coupé, 350i
While the original TVR Tasmin series featured the 2.8 litre Cologne Ford V6, in late 1981, a more modest performer, the TVR Tasmin 200, with the 2.0 litre Ford engine, was introduced. However, only 16 Tasmin 200 coupes were produced and only 45 convertibles with the model being discontinued in 1984. Another model that was introduced was the +2 Coupe in 1980. This model was also produced in limited numbers, with 47 built before being discontinued in 1985. It featured two vestigal seats in the rear which offered little room for anyone larger than a child.
In 1983, another new model was introduced called the 350i and this was the beginning of the power move for the TVR Wedge series, featuring the alloy Rover V8 which was offered in increasingly larger capacities up through the 4.5 litre.
Over time, the move to the V8 would take away from the V6 sales, however, in the United States, the V8 models were never certified for sale, so the V6 convertible and coupe were the only models available for sale to customers.
Once the new TVR was certified by the American Federal Government, the TVR Tasmin took on a modified appearance, including ungainly large black rubber bumpers front and rear, and reduced power output from the 2.8 litre engine once the smog controls were fitted.
However, the great majority of 280i convertibles and maybe one third of the S2 coupes, were designated for the US market. Approximately 40 TVR Tasmin convertibles were sent to the US in 1983, the first year it was available there. The car featured the 10-louvre bonnet that year and was known as the TVR Tasmin. In 1984, an estimated 125 cars came to the US in convertible form and were known and badged as the TVR Tasmin/280i. Along with those convertibles, an estimated 30 S2 Coupes were also sent to the US market. Virtually all the TVR wedges sent to the US market were fitted with air conditioning and leather interior, along with power windows, power mirrors, and Blaupunkt AM-FM/Cassette radio. The cars were definitely more luxurious than the M-series models that preceded them.
In mid 1985, some subtle cosmetic changes appeared and by this time, the Tasmin name had been dropped and the model was known simply as the TVR 280i. These styling changes included the departure of the large Federal rubber bumpers, to be replaced by slimmer fiberglass shells with a foam rubber insert front and rear. The front and rear valances were also changed and the taillamp clusters were changed as well. There were also some interior changes including some switchgear in the center console panel. 1985 was the biggest sales year for the 280i in the US market with an estimated 200+ cars sold that year.

Then, in 1986, the newly restyled Series 2 280i was introduced with more rounded bumpers, a revised airdam and sill extensions and upgraded instruments (changing from Smiths to VDO) and other fittings in the interior. Central door locking and an electric bootlid release was also made standard with the Series 2 cars and in the US market, power assisted steering was an available option, along with automatic transmission (which had been an option throughout the series). However, it is doubtful that more than two dozen US-spec Series 2 280is were fitted with power assisted steering. Despite all the changes, sales of the model were declining, but so was production. Of the only 149 280i produced in 1986, perhaps 125+ of them were sent to the US market.
But, because of the TVR importer in place in the US and a very poor dealer network, not to mention problems with warranty claims, TVR was on the way out of the US market for good.

The 1987 model year would prove to be TVRs last in the American market. Only 7 280is were produced for the US market that year with four of those being sold new in Puerto Rico.

The car featured in the photos belongs to Marshall Moore, President of the TVR Car Club North America and North American Liaison for the TVRCC (UK). He rescued this particular 1984 280i from a barn where it had been stored for five years before he got it. Over the past two years, he has overseen its refurbishment and is now enjoying driving it as often as possible. It is the third Tasmin or 280i he has owned since 1988 and the 7th TVR since 1976.