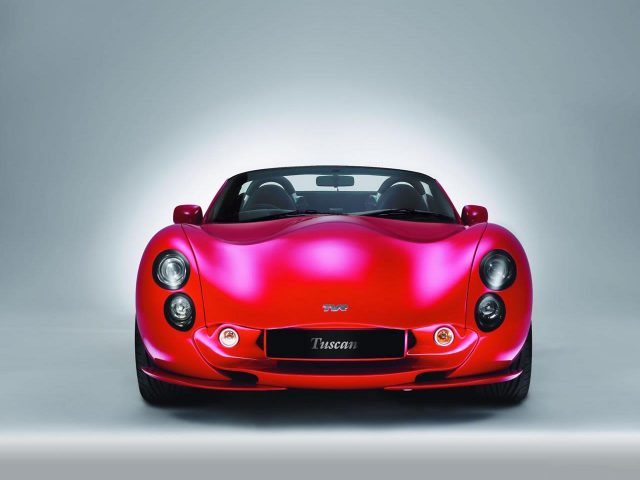 May 22nd, 2004, Birmingham Motor Show. While the roof and rear screen have always been removable on the Tuscan, many customers have expressed a desire for a full convertible. The new Tuscan convertible is launched with the 350 bhp Speed Six engine and is priced at 39,750 GBP, which is identical to that of the targa. It features twin rollover hoops that are bolted through to the chassis and slightly staggered for increased rollover stiffness as well as being trimmed for elegance. The carbonfibre roof panel is lighter than those of convertible TVRs of old for ease of use and the roof hoop is locked onto the rollover protection by means of screw catches which are very easy to fit as well as making the whole structure immensely strong. Boot space is also increased to cavernous compared to any of its competition, which adds even further to the surprising practicality of Tuscan 2.

With fluid leather-clad surfaces sweeping through the cockpit, enveloping the driver and housing sparse and distinctive machined aluminium switchgear, the interior is a minimalist TVR masterpiece. Every piece of vital information, including the gear-change lights is displayed directly in front of you, as with all current TVRs.You needn’t move your eyes from the road for more than an instant to keep track of the vital signs.This is all designed with sporting intent.
With a tuned up version of the all-aluminum inline Speed Six engine, the Tuscan S is a four-liter, 390bhp (power creeps up a little further in the very latest cars )fire breather car.

The car will rasp straight through to more than 195mph, making even a hairs’ breadth gap a safe overtaking opportunity that needs to be taken, and it can storm from 0-60mph in 3.8s.
TVR felt it was an unnecessary and costly addition when the five-speed and twin-plate clutch cope perfectly well with this level of power, even if some may prefer a six-speed gearbox in a car of this ilk.
At 100mph in second gear the defining moment in this car came without the final red shift light, even blinking into life. This machine’s fondness for high speed and intoxicating engine note makes driving it a constant exercise in self-control and it was not by accident that the TVR test car came equipped with one of the most sophisticated Gatso detection units on the market. Journalists and would-be customers tossing their driving licences in the bin at the exit of Blackpool would be bad for business, and it would happen.

TVR spend a lot of time tuning the acoustics, but it looked for all the world like they strapped two massive cans to the rear allowing every rev to reverberate a little more, increasing the rumble to a roar that could wake God.The exhaust noise encourages sheer recklessness given anything approaching a clean stretch of road. TVR pops and belches out the excess fuel under braking, spitting out minor explosions that could probably power a smaller car on their own. The bucking steering wheel requires a firm two-hands on approach at all times.with a growing tinny roar, Tuscan just feels aggressive.The car begs to be driven harder whatever the speedo says, but it doesn’t suggests the TVR is about to pitch itself into the nearest tree.

The TVR proved extremely fleet of foot round the twisting roads of Blackpool. Before relaxing and drifting out to the exit the 18″ wheels are digging in hard to the corner.

The car feels a little too eager to react so it’s a disconcerting feeling to begin with, but this is a relationship that improves with time and when you really need it most.

Compared to its major rivals from Ferrari and Porsche, its kerbweight of 1100kg makes it a serious lightweight. The car can change direction quicker than either. On the road nothing will prove too be much for this car, at least on a dry day but in the rain it will be a very different experience!
As you’d expect from racing spec brakes, the braking is awesome. The car has no ABS, no traction control, no Brake Assist while the fronts brakes are 322mm ventilated discs with four-piston calipers and the rears a single-piston sliding caliper clamps on to 298mm discs.Tuscan S can rearrange your organs under heavy braking, and the lack of weight comes into play once again as the car seemingly shoves its feet into the road and stops on command.The savage brakes fit the car’s character perfectly, even if it can lead to sensory overload.