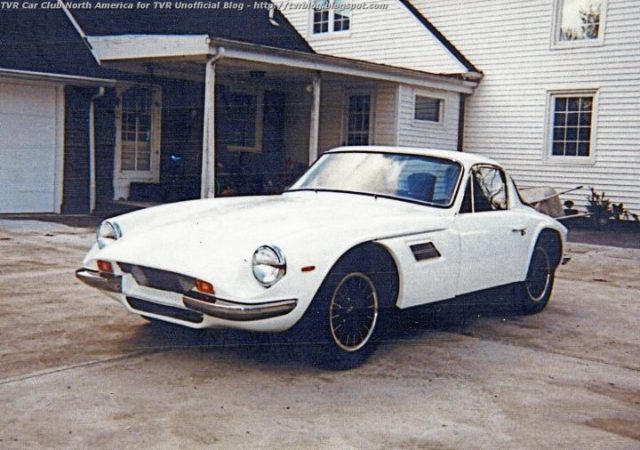 Perhaps the rarest TVR Tuscan V8 to be produced by TVR Engineering Ltd was what has become known as the “wide-body” Tuscan V8. This model was the last of the TVR Tuscan V8 series and featured an all new body that was some 4 inches wider below the waistline than the previous version. The body also featured a longer and sharper rear end design and a longer bonnet. The body would serve as the inspiration for the later M-series TVRs.

The new wide-body TVR Tuscan was welcomed in the United States, however there were a couple of problems in meeting the demand. First of all, the company was losing money on each wide-body TVR Tuscan. Secondly, to build the car took as much construction time as three of the TVR Vixen.

How many?
There are differing ideas as to how many wide-body Tuscans were actually produced. It is believed that chassis number MAL015 was the first wide body car, however, nothing is known of this car so there is some doubt as to whether a car with this chassis number was actually constructed. The first known wide-body was MAL016 and it is believed that this is the car that was used for tests by Road & Track magazine in 1970 and quite possibly the 1970 New York Auto Show car, however, this has not been confirmed.

MAL017 through MAL021 were all USA delivery wide-bodies. MAL017, now owned by Paul Guinn of Ohio, USA, has recently completed a museum quality restoration on MAL017. (see photos of the white car). Then, MAL022 was originally a TVR factory show car and a test mule. The first owner of record was Martin Lilley himself. Later Robert Nosowicz in the UK acquired the car, fitted it with a Boss 302 motor with full race specifications and much more and indicated that the car’s 540 horsepower would take it to well over 180 miles per hour.

Two more special wide body cars were built. The first carried the chassis number JDG771B302 and was built in 1971 by Joe Bishop, David Hives, and Gerry Sagerman, the US TVR importer. The Serial number carried the initials of the first names of these three men, the ‘771’ represented the month and year in which the car was built, and the ‘B302’ designated the car was fitted with the Ford Boss 302 engine. The car was assembled from parts at Sagerman’s New York shop. The car has since gone through several hands and has been in the collection of Al Way of New Jersey, USA for many years. It is painted red with twin gold stripes running down the center of the car. (see photo at the top of the page).

The final wide body was a very special version, built by Liam Churchill of Barnet Motor Company using a wide body Tuscan as a base. The car had the wheelbase stretched six inches to accommodate a Ford four wheel drive system using an automatic transmission. This car was built from one of the spare body shells from the factory and did not have a factory chassis number. Churchill acquired a Boss 302 motor that Gerry Sagerman had sent over to Martin Lilley.