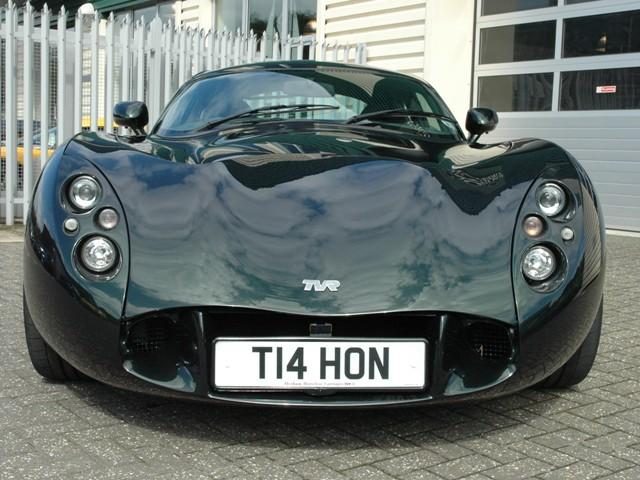 Racing Green has for sale a stunning TVR Typhon for 99.950 euro (link HERE). May we consider this car as a real instant classic? I think so!

The Typhon is a technological tour de force, a spectacular showcase for TVR’s abilities, and unquestionably the ultimate road going TVR. With acknowledgement to Patek Philippe: “You never really own a TVR Typhon. You merely look after it for the next generation”.

Racing Green TVR is proud to offer TVR Typhon No 003 for sale – before it features
in the Historics at Brooklands Auction in December 2010. Some History ? The Typhon was originally launched as the Tuscan R at the 2000 Motor Show. A stretched variant of the roadgoing Tuscan, it could be specified either as a 2 + 2 coupe for everyday use, or as a racecar designed to compete in the British GT Series. Martin Short Racing campaigned a Tuscan R in 2001. Building on this experience, TVR developed the Le Mans specification T440Rs which competed at La Sarthe in 2003, 2004 and 2005. All the TVR entries completed the distance in the last two years. Shades of Jaguar – even if TVR did not win Le Mans outright.

TVR T400Rs, with a slightly detuned engine, were then campaigned successfully in British and International GT racing over subsequent years by a number of teams – and one road-going T400 was built. TVR finally launched the iconic Typhon, equipped with a more powerful, factory-honed version of the 4.0 litre Speed Six engine. Road cars with all-carbonfibre bodywork are rare and very expensive. They are usually exotica – McLarens, and special edition Pagani and Koenigsegg hypercars.

TVR’s all-carbonfibre Typhon body weighs the same as the T440R Le Mans cars. It endows the car with a power to weight ratio which ensures 60 mph is reached in under 4 seconds, and that V Max is nearly 200 mph. The Typhon’s steel chassis was originally designed for 24 hours racing using sophisticated CAD/CAM software; rigidity was significantly increased by the (fully trimmed) race-type rollcage and an aluminium honeycomb and carbonfibre floorpan. Adjustable coilover dampers were incorporated so the suspension could be set for road or circuit use. The handling is both benign and hugely competent – in skilled hands.

The Typhon’s interior reflects its racecar origins; a distinctly minimalist style pervades the 2 + 2 passenger compartment. Unusually, the carbonfibre and aluminium structure the car is left on show, giving a utilitarian but extremely high quality feel, with all trim work featuring the highest quality Scottish hides. The car is equipped with air conditioning, but no traction control or ABS.

So, only 3 roadgoing TVR Typhons – derived from the T440Rs which campaigned and finished at Le Mans 50 years after Jaguar’s D-Types. A fair price at under £100,000 !