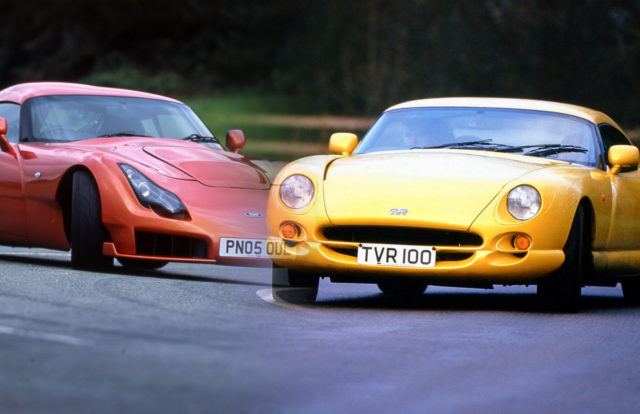 With the introduction of the new TVR Griffith the company has been suddenly shot in the future. Last September 8th a huge break has been created between the “OLD” and the “NEW” TVR.

And now Tuscan, Chimaera, Cerbera, Griffith, Sagaris and Cerbera has been moved to an older generation. So the question is: how’s the perception of those models we considered as modern from now on? How will the new car modify – necessarily – old models’ rates? Some models will be “boosted” as collectibles?

I asked some questions to Str8six’s Jason Clegg, one of the most reputed garages for TVRs. Here are his answers:

– Do you feel the new Griffith creates a break and now past models (Tuscan Speed6 MK1 and MK2, Cerbera AJP & Speed6, T350, Tamora, Sagaris) will be perceived as older ones?

The new car is a gamechanger for TVR and shares almost nothing with previous cars. The design, fit and finish is of a level never seen before on a low volume production car and will I feel be an instant sucess with the press. The shape shares little with the old cars and is designed with an eye on the future not the past.

– Do you think past models’ prices will be affected?

Yes Im sure this will have bearing on current prices as TVR’s have been an undervalued secret for some time, with the social media and press coverage of the new car this will re-ignite many peoples memories of TVR and stimulate them to surf the net looking for earlier examples.

– Do you think we’ll see an increase in rates/prices?

With a small number of cars available prices will increase due to supply and demand. These cars offer fantastic value for money, especially when viewed against similar marques.

– Do you think there will be a model (more models) that will be more appreciated than others?

I see the T cars as jewels, they are stunning to look at with TVR’s own designed engine and diminutive size for a car of this performance. Surely a recipe that will never be repeated.