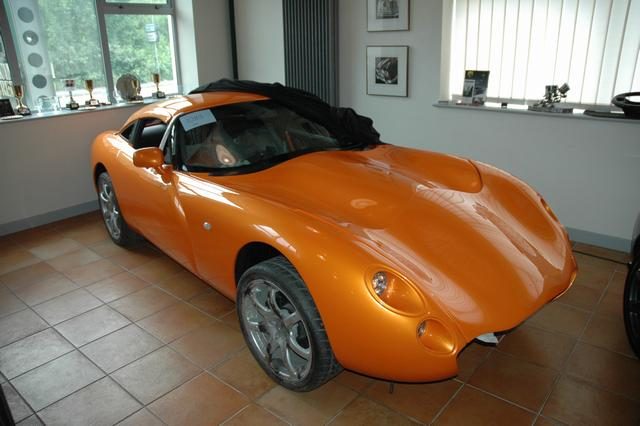 Yes, we all know it! Works at Blackpool facility ended in late 2006 so the most well-known brand among British supercars builders suddenly had no future. While all enthusiasts spread in the world are waiting for TVR to resurrect, many garages and dealers in Great Britain are alive and keep up the passion for this cars.

Most sexually excited ones goes over the common activity of servicing and buying/selling: they build new TVRs! Among them there’s TVR Racing Green, which even developed the Speed-6 engine (installed in all recent TVRs) and created the “FFF” version (“Finger-Followers-Free”).

TVR Racing Green is currently offering a brand new TVR Tuscan with Lamborghini metal orange paint (it’s advertised HERE) for who wants, thanks to the high reputation of this garage, to be proud to purchase a totally new TVR despite the factory closed. The car is still under construction and can be finished according to the buyer’s needs.

Can it be considered an original TVR?

It depends on how taliban you’re. If you think that only cars that rolled out from Blackpool facility can be considered as original, this is a well done replicant/reconstruction. Otherwise, if you think that hands at Racing Green are as passionate as TVR technicians, and that they’re real TVR technicians, this is the prrof that “something” of TVR brand is still alive and that maybe we can be confident for the future…